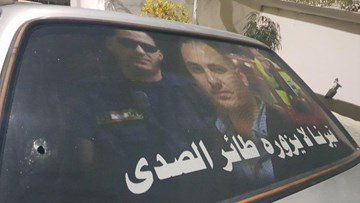 NNA said he came under gunfire as he was visiting his brother’s tomb to light candles.

“He was wounded in the shoulder and several gunshots penetrated his car as he filed a lawsuit against the attackers,” the agency added.

The Lebanese Democratic Party meanwhile issued a statement saying an “overnight clash” erupted after Abi Faraj harassed the tenants of the house of Amin al-Souqi, the fugitive accused of being behind the death of Alaa Abi Faraj.

The statement said Nizar Abi Faraj had harassed the tenants more than seven times over the past two months.

“He would carry out provocative act involving death and revenge threats,” the statement said.

The statement added that Abi Faraj would always approach the house while “drunk” and “after midnight.”

It also noted that a brother of al-Souqi’s wife had filed a lawsuit against PSP official Marwan Abi Faraj for “attacking al-Souqi’s house and inciting Nizar Abi Faraj to carry out similar acts.”

“A lawsuit was filed this morning against Nizar Abi Faraj for attacking the house and launching death threats,” the statement added.

Alaa Abi Faraj had been killed in a clash between the PSP and the LDP in the wake of the 2009 parliamentary elections.

The PSP accuses LDP chief MP Talal Arslan of facilitating the escape of the fugitive al-Souqi to Syria.

The statement said Nizar Abi Faraj had harassed the tenants more than seven times over the past two months.

So we shot him!