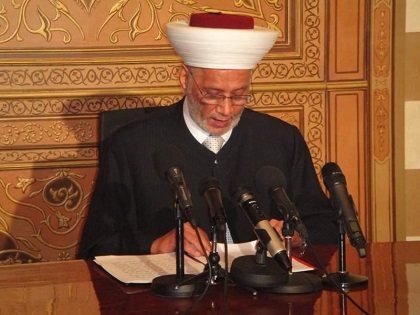 Dar al-Fatwa, Lebanon's highest Sunni Muslim religious authority, on Monday waded into the renewed debate in the country over the thorny issue of legalizing civil marriage.

The heated discussion was revived by remarks by newly-appointed Interior Minister Raya al-Hassan, who is Lebanon's and the Arab world's first female interior minister.

“The stance of (Grand) Mufti (Sheikh Abdul Latif) Daryan, Dar al-Fatwa, the juristic council and the council of muftis, which categorically rejects and opposes civil marriage in Lebanon, has been well-known for years,” Dar al-Fatwa's press office said in a statement.

“Because it fully contradicts with the rules of Islamic sharia and also violates the stipulations of the Lebanese constitution in terms of the need to respect the personal status law that is applied by the religious courts of the Lebanese,” the office added.

“Accordingly, the draft law cannot be approved in parliament without taking into consideration the viewpoint and stance of Dar al-Fatwa and the rest of religious authorities in Lebanon,” Dar al-Fatwa's press office said.

It also called for “refraining from debating and discussing the issue of civil marriage,” saying “it falls under the jurisdiction of the Lebanese republic's Dar al-Fatwa, which is entrusted with the religion of Islam and the interest of Muslims.”

Al-Hassan's statement has sparked debate between the supporters and opponents of civil marriage in Lebanon.

In an interview with Euronews, the minister said she is personally in favor of having a “framework for civil marriage” in Lebanon.

As long as these religious kiosks exist, Lebanon will always be a joke of a state.

Civil marriage causes personal connections to develop between Lebanese people of different faiths. This would be a great first step into forming strong personal relations between all lebanese, allowing us to work together and support eachother as family no matter the sect.
This should eventually eliminate the fear, hate and "racism" that are caused due to the sectarian divisions we have in Lebanon. Ultimately this would allow the Lebanese people to thrive together hand in hand as brothers and sisters rather than enemies within the boarders of one country.
Civil marriage would be very good for Lebanon in the long run and anyone against this is an Israeli agent... :)

I believe Naharnet.com is owned by two people of different sects in such a civil marriage. It seems to bear fruit. I hope I don't get them in trouble with the Ministry of the Interior by letting their secret out. I read it on Google or someplace.

Excellent, brother, I`m with you!