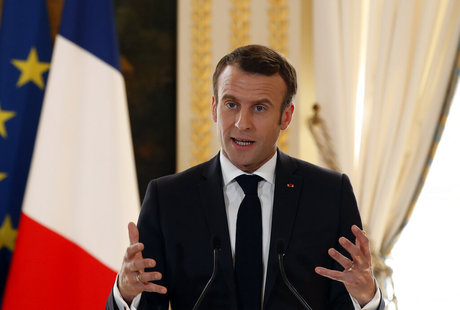 France will continue to distinguish between Hizbullah's military and political wings, French President Emmanuel Macron said Monday, after Britain said it will outlaw the political wing.

Speaking at a joint press conference with his Iraqi counterpart Barham Saleh, Macron said Paris will still “communicate and exchange viewpoints with the political movement that is represented in parliament.”

“We will continue this differentiation,” the French president added, noting that “it is not up to France and other foreign forces to know which political forces represented in Lebanon's parliament will be good or not.”

“It is up to the Lebanese people to decide on this,” he said.

Earlier on Monday, Britain said it will ban the political wing of Hizbullah, making membership of the movement or inviting support for it a crime.

“It is up to the Lebanese people to decide on this,” Macron said.

So if the Lebanese people elected Al Baghdadi as prime minister would you receive him at the Élysée Palace?

What a joke macron is!

lol @ the iranian shia with a sense of humor

Also, the Nazis gathered enough electoral support to become the largest political party in Germany. How does Macron feel about that?

What Macron is saying: "it's ok to be a terrorist organization as long as you are elected".

What is strange is this comedian president does not explain why his country and the EU consider and have listed Hamas as a terrorist organization despite the fact that Hamas was elected by the people of Gaza!