Netanyahu to Talk Iran with Putin in Moscow 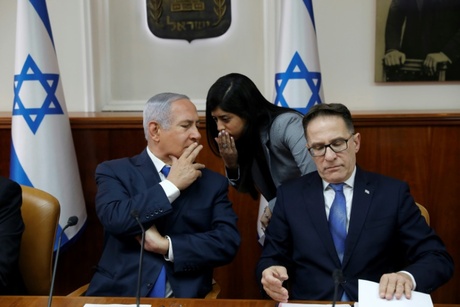 Israeli Prime Minister Benjamin Netanyahu on Wednesday was set to meet Russian President Vladimir Putin to discuss how to prevent Iran from "entrenching in Syria".

"From our point-of-view, the focus of the talks will be preventing Iran from entrenching in Syria, the entrenchment of a country which explicitly says that its goal is to wipe us out," Netanyahu said before his trip, according to his press-service.

Iran, Hezbollah and Russia are allies of Syrian President Bashar al-Assad. Netanyahu has stressed that he will not let Israel's arch-foe Iran use Syrian territory as a base for its military.

Accompanied by his national security advisor Meir Ben-Shabbat and head of military intelligence Tamir Heiman, Netanyahu is expected in the Kremlin on Wednesday afternoon.

On Sunday, the Israeli prime minister said talks with Putin will be "very important" to ensure Israel's freedom to act against Iran and Hezbollah in Syria while avoiding frictions with Russian forces.

The meeting, which Israel postponed by several days, will be the first extended face-to-face meeting since September 17, when Syria's air defence systems took down a Russian plane by mistake during an Israeli airforce operation.

The resultant deaths of 15 Russian troops caused serious tensions between Israel and Russia. Netanyahu and Putin have spoken several times since the incident, and had a brief encounter in Paris in November.

Netanyahu said his primary goal in Moscow was "to ensure that the Russian military and the IDF (Israel Defence Force) coordinate in such a manner so as to prevent friction and clashes between us," he said Wednesday.