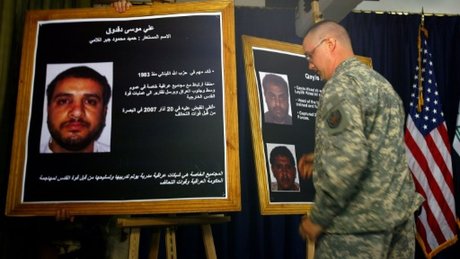 Israel's army said Wednesday it has uncovered a unit created by Hizbullah across the ceasefire line in the Syrian Golan Heights and led by a commander previously jailed over an attack on US forces.

With President Bashar al-Assad regaining control of southern Syria with the help of Russia and Hizbullah backer Iran, Israel is concerned a front against it could be established there.

Hizbullah, based in neighbouring Lebanon, has also been supporting Assad in Syria's civil war.

The Shiite group is among Israel's main enemies and the two fought a war in 2006.

Israel said the new unit had been established without Assad's knowledge, and some Israeli media reported that part of the aim in publicising it was in hopes Syria and Russia would move to stop it.

It alleged the new unit, "masterminded" by Hizbullah, had been set up "to eventually control teams of Syrian operatives who will launch attacks against Israel".

"We are not going to allow Hizbullah to establish a terror infrastructure on the Golan capable of striking Israeli civilians," said Lieutenant Colonel Jonathan Conricus, Israeli military spokesman.

"We hold the Syrian regime responsible for anything that happens inside Syria aimed at Israel."

The army said the unit was in the establishment and recruitment stage and was not yet operational.

Hizbullah began establishing it in the summer of 2018, it said.

It said it is led by Hizbullah commander Ali Musa Daqduq.

In 2012, Daqduq was released by Iraq due to lack of evidence after being accused of plotting to kill five US soldiers in the Iraqi city of Karbala.

Daqduq was captured in 2007 on suspicion he had helped organise an attack that led to the deaths of the five soldiers.

He was held by American troops until he was handed over to Iraqi officials in December 2011.

Israel says a previous such unit was established in the Syrian Golan under the command of Samir Kantar and Jihad Mughniyeh.

Kantar was killed in a 2015 air strike in Damascus blamed on Israel. Mughniyeh was also killed in an air raid attributed to Israel earlier that year.

According to Israel's military, the new unit was seeking to revive infrastructure left behind by the former one.

"The field operatives who fill the ranks of the network and act exclusively in Syria are composed of various groups and networks who previously took part in terrorist activity in the Golan Heights under the notorious network of Kantar and Mughniyeh," the army said.

Some have had training in sabotage, sharpshooting and firing Grad rockets, it said in a statement.

Syria, Hizbullah and Iran had not responded to Israel's allegations.

The suspected unit is a part of a complex series of challenges Israel says it is facing in war-torn Syria.

It has pledged to stop its main enemy Iran from entrenching itself militarily there, carrying out hundreds of air strikes against what it says are Iranian and Hizbullah targets in Syria.

With elections approaching in Israel on April 9, some suggested Wednesday's announcement may have had political motivations since it could help burnish Prime Minister Benjamin Netanyahu's security credentials.

The announcement also comes amid a new push by Netanyahu to have Israel's sovereignty over the part of the Golan it has occupied since 1967 recognised internationally.

Lindsey Graham, an influential US senator allied to President Donald Trump, toured the Golan with Netanyahu this week and vowed to work to have Washington recognise it as part of Israel "now and forever".

Israel seized 1,200 square kilometres (460 square miles) from Syria in the 1967 Six-Day War and later annexed it in a move never recognised by the international community.

Ebola is very good at fighting untrained isis flip flop fighters, but if the Syrian army never attacked Golan... it is certainly not Ebola cowards who will...

You Israelites are worse. Going in with jets, in man to man combat you are weaklings that retreats after a few casualties.

Israelites didn't have jets. They had sandals, robes and dubious hygiene, you know like a modern day Shiite.

I don't know about israélites, and I don't care Mastica... but speaking of cowards... who hid missile launching pads in Schools, and households in 2006? Who is living in the sewer since then?? Who was using Hospitals as weapons depot? You are the cowards Mastika...

Israeli fear death because they value living. Not like Hizbollah scums.