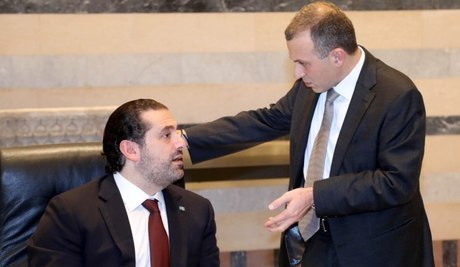 The conflict within the Lebanese government surfaced again and questions are being raised about the ability of its components to maintain minimum cohesion in dealing with thorny issues, and about the steadfastness of the presidential compromise between the Free Patriotic Movement (of President Michel Aoun) and its allies, and al-Mustaqbal Movement (of PM Saad Hariri), the pan-Arab al-Hayat daily reported Saturday.

The two sides exchanged violent campaigns recently. Leader of the Free Patriotic Movement and Foreign Minister Jebran Bassil accused the Brussels conference on the Syrian refugees - which Hariri led a delegation to- of financing the survival of the displaced in their host countries.

In a speech commemorating the March 14 anniversary, Bassil hinted at “toppling” the government when addressing controversial issues, said the daily.

Parliamentary sources considered Bassil’s rhetoric as a “latent threat” to Hariri that the FPM is capable of toppling the government by withdrawing its 11 ministers from the 30-seat cabinet, according to the daily.

Well-informed political sources said Bassil's high-level speech was due to a major dispute between him and Hariri over the electricity file and the administrative appointment when they met at the latter's house for about 4 hours last Wednesday.

In the past two years, and during the previous Hariri government, the electricity file has been a subject of contention. Hariri was more in line with Bassil's position and the FPM which has held the energy portfolio for nearly 10 years.

According to the sources, Bassil's speech yesterday aroused the anger of Mustaqbal. The response was sharp and came in the Mustaqbal TV political news bulletin.