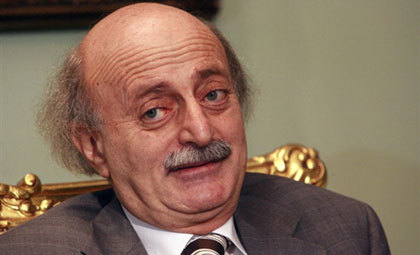 “Hizbullah defended us in 2006 but it can't usurp our decision forever,” Jumblat said in an interview on LBCI television.

“Hizbullah must listen to criticism and we have the right to speak,” Jumblat added.

Acknowledging that the residents of south Lebanon consider Hizbullah a “guarantee” in the face of Israel's hostility, the PSP leader hoped this “guarantee” will become part of a national defense strategy.

“Due to Arab disunity, Hizbullah considers itself the owner of the Palestinian cause, because the Arabs have abandoned it,” Jumblat said.

A decision by Industry Minister Wael Abu Faour to revoke the license of a cement factory belonging to Pierre Fattoush in the Ain Dara area has strained relations between Jumblat and Hizbullah, with pro-Hizbullah media outlets reporting that the party has decided to “sever” its ties with the PSP leader.

Asked whether Israel might wage a war on Lebanon in the near future, Jumblat told LBCI that he does not believe that the Israelis “want a war to break out.”

“When each sect resorts to a certain nation for protection, we will only reach an internal war,” Jumblat warned, apparently referring to remarks by Aoun.

“We thank you for your stances that defend the Christian minorities in the Levant and we hope you will continue this help,” Aoun told Russian President Vladimir Putin during the Kremlin meeting.

Jumblat added: “We do not agree a lot with Jebran Bassil's strategic views.”

Commenting on regional developments, Jumblat said: “I'm Arab but not in the fashion of Bashar al-Assad. Arabism without democracy and humanity has no meaning.”

“The Palestinians' right to return will be dropped in Jared Kushner's scheme,” he warned.

No ya scumbag! Hezbollah started a war that devastated our country and left us defenseless.

There will NEVER be stability and economic prosperity as long as there is a roving militia that dictates what happens on all levels.

Funny thing is they keep talking about Arab Summits this and that, but the truth is there is no unity between the arabs. Only thing they share is language, culture and some religion. Each one is looking out for themselves.