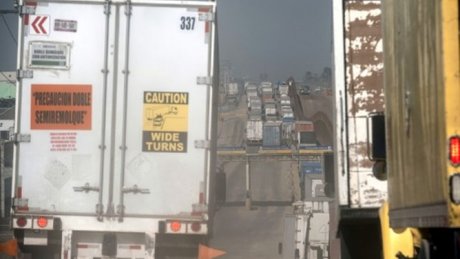 Mexico expressed fresh concern to the United States Friday about delays in the movement of goods and people across their border, after becoming Washington's biggest trade partner for the first time earlier this year.

The diplomatic note from the foreign ministry is the latest sign of tension between the north American neighbors since President Donald Trump last month threatened to close the border if Mexico didn't stop illegal immigrants from reaching the US.

"During the month of April there has been an economic impact to Mexican and American companies caused by the delays in customs," the foreign ministry said in a statement.

The situation on the border "negatively impacts trade as well as the sources of employment and consumers in both countries," it said.

According to the Foreign Ministry, in the first two months of the year Mexico was "for the first time in history" the main trading partner of the United States, with goods worth $97 billion changing hands.

Data from the Ministry of Finance shows that from January to November 2018, bilateral trade was worth $527 billion.

Some 80 percent of Mexico's exports are to the United States.

In March Washington ordered the re-assignment of 2,000 customs officers to support the border patrol in the processing of a wave of migrants seeking to enter US territory. The stepped-up surveillance has sparked delays in processing the passage of goods and people.

Tens of thousands of Central Americans have traversed Mexico in so-called "caravans" in the hope of reaching the United States.

Trump says the migrants are a threat to US national security and has demanded that Mexico detain them and send them home. He has also threatened to close the border if Mexico doesn't act.