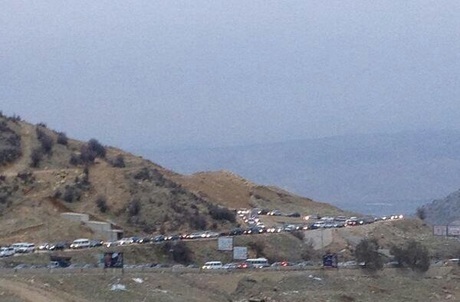 The relation between the Progressive Socialist Party and Hizbullah has “never” experienced a “break-like stalemate” and a “unilateral” decision taken by Hizbullah without prior “warning,” Asharq al-Awsat said on Thursday.

Ties between the two have reportedly been tense against the backdrop of a decision taken by PSP Industry Minister Wael Abou Faour, cancelling a cement factory permit in Ain Dara -in the district of Aley not far from the Chouf cedar reserve- issued by his predecessor Hizbullah ex-Minister Hussein Hajj Hassan.

Political sources following on the course of relations told the newspaper that the PSP leadership has “informed Hizbullah of Jumblat’s will to meet Hizbullah secretary-general's political aide, Hussein Khalil, to discuss the political developments and the relationship between the two parties.”

The sources said that Jumblat’s desire was “conveyed” to Khalil but the latter did not give an answer despite knowing that Jumblat was ready to meet him, they said. “It turned out that Abou Faour's permit cancellation was considered an insult to Hizbullah and to its Minister.”

This cement project has long been controversial between its owners of the Fattoush family, on the one hand, and the Ain Dara municipal council and many citizens and activists, on the other.

Jumblat and former minister Nicolas Fattoush are at loggerheads over the cement factory in Ain Dara area.

The factory is owned by Fattoush's brother, Pierre.

The cancellation of this permit was itself the subject of press campaigns close to Hizbullah earlier in April.