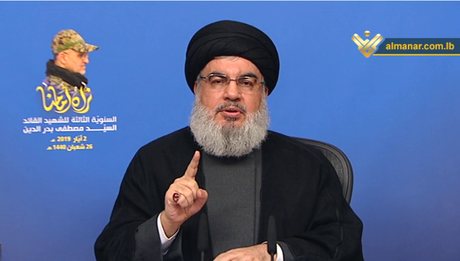 Hizbullah chief Sayyed Hassan Nasrallah on Thursday hit out at Druze leader Walid Jumblat without naming him, saying his remarks on the identity of the Israeli-occupied Shebaa Farms are "worthless."

"As for the issue of the Shebaa Farms, the (Lebanese) state says that they're Lebanese and this was mentioned in the governmental policy statements. This is a settled and finalizef issue regardless of who says yes and who says no," Nasrallah said in a televised speech marking the death in Syria of Hizbulla military commander Mustafa Badreddine.

"As long as the state, the government and the parliament consider the Shebaa Farms Lebanese territory, we do not have a problem and the issue is settled. Accordingly, any other talk from anyone is totally worthless and irrelevant," Nasrallah added.

Jumblat has announced that the Farms are not Lebanese but rather Syrian seeing as Lebanon has failed to submit the necessary documents to the U.N.

Separately, Nasrallah said reports of an imminent Israeli war on Lebanon are aimed at pressing the Lebanese state to "surrender and offer concessions."

"America is seeking Lebanese concessions on the issue of the territorial and maritime borders and the Shebaa Farms for the benefit of the Israeli enemy. It is also seeking concessions regarding Lebanon's elements of strength, including the resistance and its missiles," Nasrallah warned.

He added: "The Lebanese must not allow anyone to intimidate them, because Lebanon is strong through its army, people and resistance and this strength is real and serious."

And revealing that Hizbullah has identified a target in Israel that would cause more damage than the ammonia tanks if hit by a missile, Nasrallah vowed that his group would "destroy and crush" any Israeli forces that might try to enter into Lebanon in a future war.

"That will be broadcast by international TV channels," he added.

When will this traitor liberate Shebaa Farms?

Nasrallah: Day after day, the soundness of our choice and decision to go into Syria is more and more asserted.

why don't you go into Sheba Farms ya irani?

This guy gets billions of tax and duty free Iranian cash including his own personal salary, says never uses Lebanese banks or financial institutions. His party and the companies and individuals that work with it import billion worth of tax and duty free goods through the ports, airport and the legal and illegal lands crossings that his community consumes tax free. And he thinks he can preach to anyone on financial matters? He and his community should start with paying their fare shares in taxes and duty then he can talk.