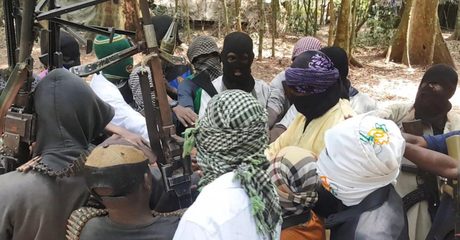 Twenty-two people who were kidnapped in eastern DR Congo last week in a raid claimed by Islamic State have been released by their abductors, local sources said Tuesday.

"There are 22 (released) people in all -- 16 men, five women and a little girl," the government's administrator for Beni in North Kivu province, Donat Kibwana, told AFP.

"They were kidnapped in Samboko-Tchani Tchani in last week's attack."

One of those released AFP that the kidnappers freed the 22 after a three-day march following last Thursday's raid.

They were still holding six people, including five members of the same family, he said.

He said the kidnappers were physically different from local people and "speak good Swahili, like in East Africa (Tanzania)... and another language that I couldn't identify."

According to the SITE Intelligence group, the Islamic State group claimed responsibility for the attack on "Chianchiani" and on another village, Kumbwa in Kamango.

They said they had attacked Congolese military bases.

Kibwana, in his initial account of the incident last Thursday, said 10 people had been abducted.

AFP could not immediately verify the claim by the so-called Islamic State jihadist group.

Last month, the group for the first time claimed to be behind an attack on a Congolese army position in North Kivu province.

Another Islamist-rooted organization, the Allied Democratic Forces (ADF) -- forced out of Uganda in the mid 1990s -- is regularly accused by the authorities of attacking army positions in North Kivu.

The ADF has also been implicated in attacks on civilians, notably a 2014 massacre in Beni that killed hundreds of people, as well as kidnappings.