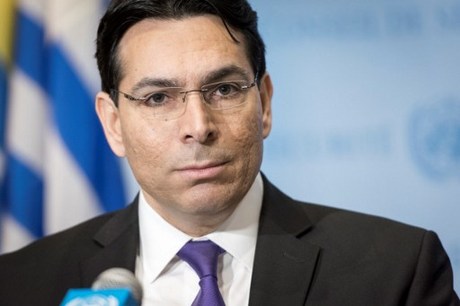 Israel's U.N. ambassador on Monday urged Palestinians to surrender their struggle for a homeland in exchange for economic benefits as the United States prepared to roll out part of a peace plan promising billions of dollars.

Palestinian leaders have said the U.S. plan will be tantamount to surrender and declared President Donald Trump's initiative as dead on arrival.

"Surrender is the recognition that in a contest, staying the course will prove costlier than submission."

Trump's son-in-law Jared Kushner is set to open the conference in Bahrain later Monday to unveil plans for raising $50 billion in investment for the Palestinians and their Arab neighbors.

"The Palestinians have little to lose and everything to gain by putting down the sword and accepting the olive branch," wrote Danon.

Palestinian chief negotiator Saeb Erekat "misleadingly suggests that a 'surrender' will lead to an end of the Palestinian people," he added.

"But nothing could be farther from the truth. Instead, surrendering will create the opportunity to transform Palestinian society, thereby leading to his people's liberation."

Danon took aim at the Palestinian leadership, accusing it of corruption and citing a poll that said 90 percent of Palestinians do not trust it.

The Gaza Strip is run by the militant group Hamas, whose "tactical playbook (is) drawn from Hizbullah and al-Qaida, and much of its financial support from Iran," he said.

A pledging conference to raise 1.2 billion dollars for the U.N. Palestinian agency UNRWA is due to open at U.N. headquarters in New York on Tuesday.