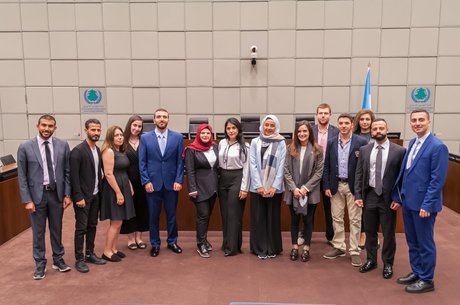 A group of fifteen students from Lebanese universities visited the Special Tribunal for Lebanon (STL) from 1 to 5 September 2019 as part of a three-day study visit to The Hague.

The visit enabled the students who have attended the Inter-University Program on International Criminal Law and Procedure (IUP-ICLP) to see first-hand some of the institutions about which they had been studying.

The students’ visit at the STL, the second in a fortnight, included briefings by representatives of the four organs – the Chambers, Registry, Office of the Prosecutor and Defense Office as well as a courtroom tour.

The study visit to The Hague is part of the seventh edition of the IUP-ICLP. The course, the first of its kind in the Middle East and North Africa region, was set up in 2011 in cooperation with the T.M.C Asser Instituut in The Hague and 11 Lebanese universities. The Program is aimed at law, political science and international affairs students in Lebanese Universities, currently at no cost to them. The curriculum covers topics such as the history of international law, genocide, crimes against humanity, war crimes, crimes of terrorism and the role of the STL, the rights of the accused in international criminal proceedings, and the role of victims. Almost one thousand Lebanese students have graduated from the IUP-ICLP since its establishment in 2011.