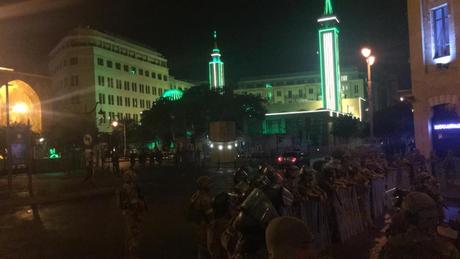 Violent clashes and riots had broken out in downtown Beirut following a speech by Prime Minister Saad Hariri, who gave political parties a 72-hour ultimatum to support his reform agenda or face a possible resignation.

Thousands of protesters have been rallying across the country for the past two days, raging against top leaders including the president, prime minister and parliament speaker whom they blame for decades of corruption and mismanagement that have led to the current crisis.

The protests are the largest Lebanon has seen since 2015 and could further destabilize a country whose economy is already on the verge of collapse and has one of the highest debt loads in the world.

The protests, triggered partly by a proposal for a $6 monthly fee for WhatsApp voicecalls, drew people from all religious and political backgrounds and were largely peaceful, although violence erupted in several areas. Many said they would remain on the streets until the government resigned.

Hariri said he understood the people's "pain" and anger at his government's performance and said "we are running out of time."

Shortly after his speech, security forces fired tear gas and water cannons to disperse the protesters in central Beirut, leading to confrontations between police and young men in a downtown square. Others marched on the presidential palace in Baabda.

Time and again, the protesters shouted "Revolution!" and "The people want to bring down the regime," echoing a refrain chanted by demonstrators during Arab Spring uprisings that swept the region in 2011.

They took aim at every single political leader in the country, including President Michel Aoun and his son in law, Foreign Minister Jebran Bassil, as well as the prime minister and parliament speaker, blaming them for systemic corruption they say has pillaged the country's resources for decades.

"We are here today to ask for our rights. The country is corrupt, the garbage is all over the streets and we are fed up with all this," said Loris Obeid, a protester in downtown Beirut.

Schools, banks and businesses shut down as the protests escalated and widened in scope to reach almost every city and province. Hundreds of people burned tires on highways and intersections in suburbs of the capital, Beirut, and in northern and southern cities, sending up clouds of black smoke in scattered protests.

The road to Beirut's international airport was blocked by protesters, stranding passengers who in some cases were seen dragging suitcases on foot to reach the airport. Major arteries including the Salim Salam tunnel that connects central Beirut with the airport were blocked with sand dunes.

"We are here for the future of our kids. There's no future for us, no jobs at all and this is not acceptable any more. We have shut up for a long time and now it is time to talk," Obeid added.

In the northern city of Tripoli, bodyguards for a former member of parliament opened fire at protesters who closed the road for his convoy wounding three of them, witnesses said.

The tension has been building for months, as the government searched for new ways to levy taxes to manage the country's economic crisis and soaring debt.

The trigger, in the end, was the news Thursday that the government was planning, among other measures, to impose a tax on WhatsApp calls -- a decision it later withdrew as people began taking to the streets.

Two Syrian workers died Thursday when they were trapped in a shop that was set on fire by rioters. Dozens of people on both sides were injured.

Years of regional turmoil -- worsened by an influx of 1.5 million Syrian refugees since 2011 -- are catching up with Lebanon. The small Arab country on the Mediterranean has the third-highest debt level in the world, currently standing at about $86 billion, or 150% of its gross domestic product.

Yes, I have seen videos of the army insulting and threatening students yesterday.... despicable!