Gunmen Break Up Protests against Berri in Tyre 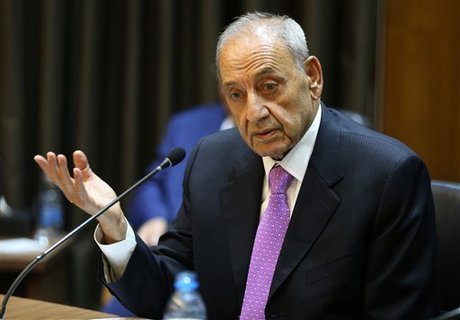 As hundreds of Lebanese gather for fresh protests on Saturday, armed clashes were reported in the southern city of Tyre when protesters chanted slogans opposed to AMAL Movement leader and Speaker Nabih Berri.

“Gunmen have attacked us, beat us and opened fire,” one women said. As several youth took to social media expressing resentment.

The protesters claimed they “were left to their own fate,” denouncing what they said “total absence of the army and security forces in Tyre” to defend them.

Protesters were reportedly subject to gunfire when they stormed the offices of AMAL MPs, Hani Qobeissi and Yassin Jaber.

It is the first time that Tyre has seen public opposition to Berri.

Hundreds gathered in Lebanon Saturday for a third day of protests against tax increases and alleged official corruption after the security forces made dozens of arrests.

After a rise in the dollar exchange rate and the strike of fuel stations and bakeries, the government decided to impose a tax on gasoline, raise the value-added tax and impose a fee on the use of WhatsApp.

What do u mean the army? The army takes orders from the brezident who was appointed by berri's parliament.

The only country in the world where the speaker of the house has a private army of thugs!

He should be the first one to step down. 30 years as speaker, it's become his play house. The only ones who can beat his thuggish goons are Hizbos, which if you all recall long time ago they did.