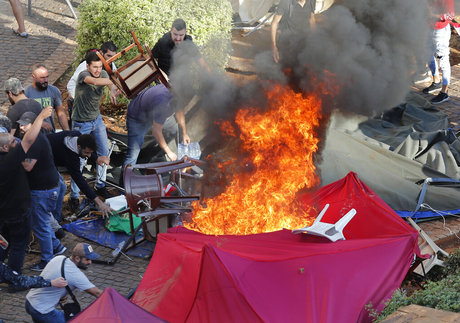 Hundreds of Hizbullah and AMAL Movement supporters, some wielding sticks, on Tuesday attacked a protest camp set up by anti-government demonstrators in downtown Beirut, burning some of its tents and dismantling others.

The violence came shortly after dozens of other Hizbullah and AMAL supporters, also wielding sticks, attacked a roadblock set up by the protesters on neighboring Ring highway, a main thoroughfare in the capital.

Groups of protesters eventually returned to the main squares and began repairing their tents, while others went back to blocking the roads. They could be heard chanting one of the main slogans of the protests, "All means all," which is seen as referring to all of Lebanon's political factions, including Hizbullah and its allies.

It was unclear how many people were wounded. Fights broke out in places and security forces could be seen beating some people with batons.

The protesters armed themselves with wooden batons and metal poles as the Hizbullah and AMAL supporters approached but fled when the counterdemonstrators arrived in larger numbers. Security forces later fired tear gas to disperse them, but only after they had destroyed and set fire to several tents.

For nearly two weeks, the main protest square had been home to impromptu concerts in the evenings, with hundreds dancing deep into the night to music blasting from speakers.

After Tuesday's attack, streets were strewn with litter, as people tried to salvage what they could from the torched remains of their tents.

"There are political orders to attack. This was not spontaneous," said one demonstrator alluding to AMAL and Hizbullah, neither of which were spared by protesters, including from their own base.

The violence comes on the 13th day of Lebanon's anti-government protests, which have been an unprecedented expression of anger that's united millions of Lebanese against what demonstrators say is a corrupt and inefficient political class in power for decades since the 1975-1990 civil war.

But in recent days, Hizbullah leader Sayyed Hassan Nasrallah grew critical of the protests, claiming they have been backed and financed by foreign powers and rival political groups. He called on his supporters to leave the rallies, and urged the protesters on Friday to remove the roadblocks. The mass rallies have paralyzed a country already grappling with a severe fiscal crisis.

Hizbullah and its allies dominate the current government and is the country's most powerful organization, building its credibility on its resistance to Israel's years-long occupation of parts of Lebanon.

The riot police and military first moved in Tuesday trying to separate the rival groups, but the security forces failed to stop the storming of Martyrs Square, where anti-government protesters have held their ground since Oct. 17.

The protesters are calling on the government to step down, holding rallies in public squares and promoting a civil disobedience campaign that include blocking main roads.

At the Beirut roadblock, the angry crowd swelled by early afternoon, some using sticks to chase protesters away. Some of the men also attacked journalists, kicking them and attempting to smash their cameras.

Many among the angry mob chanted: "God, Nasrallah, and the whole Dahiyeh," in reference to the southern suburb that is a stronghold of Hizbullah. Others told TV crews that they were upset at the roadblocks and insults to their leader.

Then they marched to the central square, tearing down tents, smashing plastic chairs and using metal poles to poke holes in the tents, which they later burned. They also beat some anti-government protesters. One TV presenter described it as "a war scene."

In his speech on Friday, Nasrallah evoked the specter of new civil war like the one that ended in 1990, saying "someone is trying to pull it ... toward a civil war."

It was seen a precursor to the confrontation Tuesday.

Didn't your master command you to back off last Friday? go back to your kennels and bark in there. Scum.

Put these Basij in jail, remove by force all Hizb arms provided by Iran for the benefit of Iran, and bring Hizbollah and its leaders to justice for all the crimes, drug network, money laundering so Lebanon has finally a chance for independence, sovereignty, freedom, justice and democracy! This will bring some justice to Hariri, Tueni, and the many other martyrs killed by Hizb and give a breath of fresh air to the Shia community so long oppressed by this Iranian occupation force.

FPM are the gutter of Lebanese politics. They are the Basij facilitators and traitors to the bone. After 2005, Lebanon was on its way for real democrtacy, independence and prosperity; its way to become the economic powerhouse and Silicon Valley of the region... FPM stabbed our democracy in the back and sold their soul for political gain. Democracy is inevitable in a country with so much talent and bringing all traitors to justice is a necessary step to achieve justice and long-term freedom and independence.

Lebanon Government, its presidency and its policy has been hijacked by Hizbollah since 2006. These are the same Basij that brutally suppressed, under the world eyes, the peaceful Green Revolution in Iran in 2010 by its most educated and productive sector of the Iranian society. The same brutality will be employed in Lebanon as the Basij are the same and FPM is nothing but traitors who sold their soul and Lebanon freedom to the Basij. But this brutality will not succeed in Lebanon who taught the region democracy, freedom and civility.

It was the FPM MoU with Hizbos that have kept the Hizbos alive and gave them cover. otherwise all parties except a few would've backed them. FPM's gamble was that an armed militia would get them the presidency and by god they did.