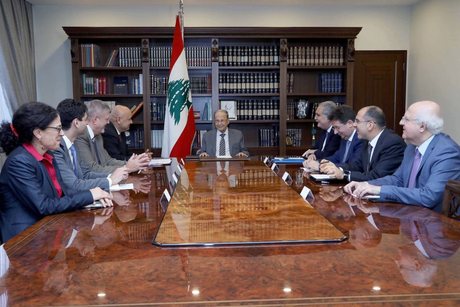 President Michel Aoun on Wednesday stressed that a fresh anti-corruption crackdown will not spare any incumbent or former official suspected of wrongdoing.

“The new government will comprise ministers enjoying expertise, economy and integrity who are not suspected of any corruption,” Aoun told a World Bank delegation led by Regional Director Saroj Kumar Jha.

“The investigations that will target incumbent and former officials suspected of misconduct will not spare any of those involved,” the president added.

“Lebanon is at a critical crossroads, especially at the economic level, and it is in dire need of a harmonious government that can be productive without being obstructed by political conflicts and bickering,” Aoun went on to say, noting that the new government should also enjoy “the needed support from the people.”

The president also emphasized that he will not hesitate to “propose any reformist law that suits the priorities of the coming period,” revealing that “17 corruption-related files have been referred to investigation and will be addressed.”

“Accountability will encompass all the culprits, participators and facilitators,” Aoun underlined.

with the exception of my family, Berri, Hariri, siniora etc... What a looser

yaaa Aoun! You shall have to answer about the millions you stole and registered in the name of your spouse in a Bank in London in 1989/1990! Your time will come if you are still alive, and shame shall shadow your family for decades!

why aren't you forcing all politicians to remove their immunity and bank secrecy for themselves and their families for the last 30 years? If they don't, go after them first.