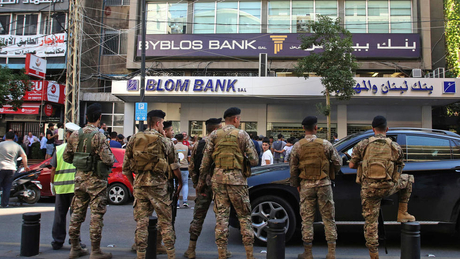 Banks in Lebanon opened on Tuesday after a week of strikes following incidents with clients angered by restrictions on withdrawals, as a protest movement entered its second month.

The Federation of Syndicates of Banks Employees in Lebanon announced the end of the strike on Monday, saying new security measures had been agreed with authorities to protect banking institutions.

The situation remains tense in the country, as an unprecendented protest movement against the ruling elite entered its second month on Sunday.

Hundreds of thousands of Lebanese have filled streets and blocked roads across the country since October 17, demanding the ouster of a political class they deem incompetent and corrupt.

The demonstrations led to the resignation of Prime Minister Saad Hariri and his government, but a new premier has yet to be named weeks later.

A parliamentary session to discuss several controversial laws, already postponed for a week due to pressure from the street, is set for Tuesday.

A call has gone out for protesters to form a human chain blocking routes to the parliament building at the heart of the capital Beirut to stop lawmakers from attending the session.

Lawmakers are expected to discuss a general amnesty law that would include thousands of people.

Activists say the text could exonerate those convicted or suspected of involvement in tax evasion or environmental crimes.

Protesters have demanded prioritisation of legislation that will bring corrupt officials to justice or recuperate misappropriated public funds.

The protests have brought the country to a standstill and the already struggling economy closer to crisis.

Banks have only opened for one week over the month of rallies, with restrictions on withdrawals, foreign currency transactions and access to dollars causing bank clients' tempers to flair.

Protesters have also often blocked banks from opening to make a statement against a banking system they see has part of the problem.

"It is unacceptable that bank employees become scapegoats, that they be humiliated and held responsible," the president of the bank employees union, George al-Hajj, told a news conference on Monday.

He said the strike has been called off after new security measures were adopted, including the posting police in front of banks.

The Association of Banks in Lebanon announced on Sunday "temporary" arrangements authorising the withdrawal of $1,000 per week for those with accounts in US dollars.

The Lebanese pound has been pegged to the US dollar at around 1,500 for two decades and the currencies are used interchangeably in daily life.

But amid the deepening economic crisis, the exchange rate in the parallel market has surpassed 1,800 Lebanese pounds for every dollar.