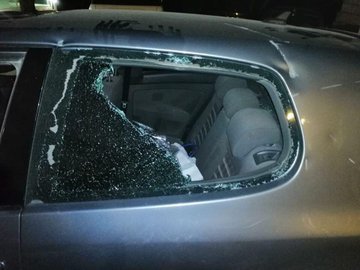 A confrontation erupted Tuesday evening between supporters of the Free Patriotic Movement and the Kataeb Party in the Northern Metn town of Bikfaya.

The standoff started after a pro-FPM convoy comprised of dozens of cars arrived outside the residence of former president and Kataeb leader Amin Gemayel.

Bikfaya residents and Kataeb supporters later blocked the town’s entrance to prevent the entry of the convoy, asking the FPM supporters to take the Dahr al-Sowwan-Baabdat road.

Kataeb supporters later attacked the cars and pelted them with stones, wounding a female FPM supporter in the head.

Video footage showed a number of cars with smashed windows and supporters of the two parties chanting rival slogans.

The army intervened quickly and separated between the two groups. The National News Agency meanwhile said that the army was negotiating with the two parties in order to end the standoff.

Bikfaya is a stronghold of Kataeb and the hometown of its founder Pierre Gemayel.

Media reports said the FPM supporters accused ex-president Amin Gemayel of corruption in the files of the Dbaye marina and the Puma aircraft controversy.

Hizb had a choice to make during these protests. Either stand up and face the corruption or defend its corrupt allies. It chose to defend its allies. They’re complicit at the very least. Whatever moral high ground they thought they had Is now over.

Listen to all of you in this forum! Stop it! Put down your party flags please!!!!

And Mystic it is absolutely clear your militias started this mess... so go back to iran you thug!

And mystic by god Iran and Israel are great under the table friends.... they Are overtly enemies but covertly friends! You Sheep!!!!

Fact during the Iran iraq war Israel sells f14 spare parts to Iran... 2003 USA hands over iraq to Iran As we see today... fact Israel gave political coverage to Hizb Allah in 2006 by attacking each other, by god! It was just a show for the masses of sheep in Israel and lebanon! ... fact why when Gaza was being attached for a month the great suporter of the Palestinians Iran and Kizb did not mention a WORD in condemnation during around 2013~

I assure you, Bashar has realized that Iran has now secured the occupation corridor from Iraq syria and in Lebanon... why! To help Israel... to control the arab and the Phoenicians

All this talk about war with iran is pure fear mongering!

But a revolution has started against the corrupt from Iran to Lebanon... You watch how events soon will be created in favour of iran and kizb and all the corrupt by the USA Europe and of course their master Zionest. You’ll see...

Only Iran will be on top because of the Zionests

Kataeb thugs Attacking women and children. Its in their Blood.