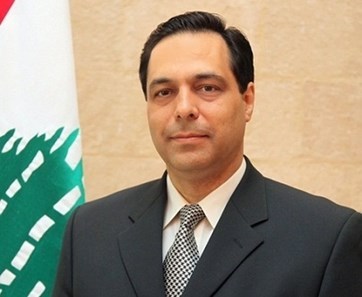 Lebanese academic and former minister Hassan Diab on Thursday received 69 votes in the binding parliamentary consultations to name a new PM, as former Lebanese ambassador to the U.N. Nawaf Salam received 13 votes and 42 MPs refrained from naming anyone.

The Presidency later announced that Diab was invited to the Baabda Palace to be "tasked with the formation of the new government."

Diab, 60, faces the daunting task of forming a government to tackle the country's worst economic crisis since the 1975-90 civil war.

A professor of computer engineering, Diab served in the government formed in 2011 when Hizbullah and its allies overturned a former Cabinet headed by Saad Hariri. He was education minister for three years.

The international community has made the formation of a serious, reform-minded government a condition for releasing assistance to the country.

It was not immediately clear whether the appointment would satisfy people in the streets who have been protesting for over two months, calling for a government made up of specialists.

Activists on social media have however blasted Diab, accusing him of corruption, and calls have been made for protesting outside his residence in Beirut's Tallet al-Kkhayat area.

Protesters meanwhile blocked the Taalabaya and al-Marj roads in the Bekaa and the al-Beddawi road in the north following the end of the consultations.

Protesters in al-Marj said that they reject the designation of a former minister who belongs to the reviled political class.

Some protesters in Tripoli and Beirut also said that they are opposed to the designation of Diab.

The first to arrive at Baabda Palace for consultations with President Michel Aoun was Hariri, who refrained from making any political statement to reporters on his candidate for the prime minister post. He only looked at them and smilingly wished them “happy holidays and good luck.”

Ex-PMs Najib Miqati and Tamam Salam said they did not nominate anyone for the post.

“In light of the over two-months political dispute over parliamentary consultations and the drastic economic conditions in Lebanon as a result of mismanagement, I find myself today obliged not to name anyone for the premiership post,” said Salam.

For his part, deputy Speaker MP Elie Ferzli Ferzli said: “I would have preferred to name Hariri for the post, but due to the current difficult circumstances I named Hassan Diab as the next PM.”

Diab, an AUB professor, has emerged on Wednesday as the favorite to be nominated as the next prime minister.

Hariri’s al-Mustaqbal parliamentary bloc also did not name anyone for the PM post.

“As you are all aware we have called for the formation of a technocrat government, and our bloc will name no one for the post,” said MP Samir al-Jisr speaking on behalf of the bloc.

For its part, Hizbullah’s Loyalty to the Resistance bloc named Hassan Diab for PM.

“As we have all seen that Hariri decided not to stay as PM, he also did not name anyone for PM. Therefore our bloc has seen it necessary to take action in light of the difficult circumstances and have decided to name a clean and honorable figure, AUB professor Hassan Diab,” announced Khazen after meeting Aoun.

“We surely hope the government is formed as soon as possible to address the current crisis,” said Taymour Walid Jumblat in remarks after meeting Aoun.

The parliamentary bloc of the Syrian Social Nationalist Party named Diab. “Discussions touched on the worrisome situation in Lebanon. We are eager to deflate the tense political rhetoric in Lebanon,” said MP Asaad Hardan after meeting with Aoun.

“Proceeding from the will of the Lebanese people who want a change and a new nation. We warn against the return of political alignments. We consider the most appropriate figure to head the new government is Nawaf Salam, the Kataeb bloc said.

"Sixty days after (the eruption of the popular uprising), some are still seeking ways to split shares," MP George Adwan of the LF said.

"If the mentality and approach do not change, we will not be able to move forward and the country will sink further," Adwan warned.

Al-Sayyed said he voted for Diab seeing as "he is an academic and a technocrat figure and someone who does not belong to the traditional circle of prime ministers."

"But nomination is something and confidence is something else, especially if the government's structure does not meet the demands of the people," al-Sayyed added.

"The uprising has the right to have a say in the naming of a premier and the formation of a government," Mashnouq said.

"The nature of the designation indicates that authorities have downplayed the 62 days of popular protests," he warned.

Frem meanwhile warned that the 1943 National Pact of coexistence was not respected in the nomination of Diab.

Later on Thursday, Speaker Nabih Berri's Development and Liberation bloc said it nominated Diab for the PM post in order to "avoid vacuum."

The MPs of the Free Patriotic Movement, the Mountain Guarantee bloc and the bloc of Armenian MPs meanwhile voted for Diab as MP Michel Mouawad voted for Nawaf Salam.

Outgoing PM Saad Hariri on Wednesday said he would not seek to stay on as prime minister.

The consultations for a new cabinet had been postponed twice already.

Hassan Diab, if he has any common sense, should refuse the PM post. Riad Salameh should resign. Let Hizbollah, Amal and their puppet FPM who have taken Lebanon to the abyss deal with the consequences. They have destroyed and bankrupt our country that has the best human potential in the region for the glory of the criminal regimes in Iran and Syria. Their day in court is near for justice will always prevail at the end!

Worse than Hariri. A man chosen by Ebola...