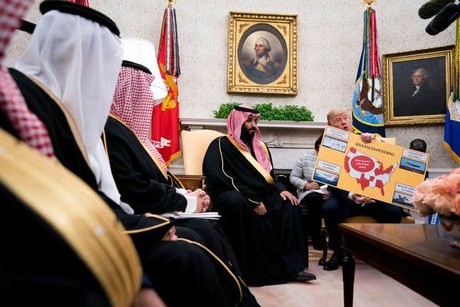 The US has put its ally Saudi Arabia in Iran's crosshairs with the assassination of a top general, leaving it bracing for retaliation just as it was working to ease tensions after a torrid 2019.

American officials say the kingdom faces a "heightened risk" of drone and missile attacks after the killing in Baghdad last week of powerful Iranian commander Qasem Soleimani in a US drone strike.

The assassination has sparked fears of a regional conflagration as Tehran vows to take "severe revenge", with Saudi Arabia calling it a "very dangerous moment".

Riyadh has tried to distance itself from the US strike, with a Saudi official telling AFP the kingdom was "not consulted" by Washington before the killing.

Saudi newspapers close to the regime have sought to deflect blame onto rival Doha, saying the drone that downed Soleimani took off from a US base in Qatar, glossing over the deployment of American troops in the kingdom.

"It's pretty clear that the Saudis don't welcome this crisis even though they have to be quietly delighted with the killing of Soleimani," said Hussein Ibish, a scholar at the Arab Gulf States Institute in Washington.

"They know they would be in the crossfire if war breaks out, so they are doing everything they can to bring down the temperature."

In recent months, Saudi Arabia and its arch-nemesis Iran have taken steps towards Iraq-brokered talks in a bid to defuse tensions that have brought the Middle East to the brink of war.

Iraq's prime minister, Adel Abdel Mahdi, said Sunday that he was expecting to meet Soleimani on the day he was killed, saying the general had travelled to deliver a response from Tehran to an earlier Saudi message.

Analysts had fretted that Saudi leaders, frustrated with former US president Barack Obama's outreach to Iran and who welcomed Donald Trump's hostile stance, would drag Washington into another intractable conflict.

But Riyadh appears chastened by coordinated attacks on key oil installations last year, which were blamed on Iran, despite its denials.

Washington's seemingly tepid response after the September 14 attacks affirmed the view that the kingdom could not rely on its closest Western ally to come to its aid if a conflict erupted, analysts say.

"The September 14 assault in Saudi Arabia demonstrated its inability to protect their critical infrastructure against asymmetrical attacks," said Kristian Ulrichsen, a fellow at Rice University's Baker Institute in the United States.

"With both the Saudis and its ally the UAE gearing up for global events this year -- the G20 summit in Riyadh and the Dubai Expo 2020 -- both will be desperate to avoid any escalation that could put them in doubt."

Riyadh has quietly tried to disentangle itself from other regional crises.

It appears to have stepped up direct talks with Yemen's pro-Iran Huthi rebels it has been fighting for almost five years, leading to a noticeable decline in attacks by both sides.

Riyadh is also in talks with Qatar over ways to ease a two-year Saudi-led boycott on its neighbour.

"The killing of Soleimani... threatens to upend this progress," said Stephen Seche, vice president of the Arab Gulf States Institute in Washington.

"It greatly increases the likelihood that elements within the Huthi movement close to Tehran will be tempted to... strike deep into Saudi Arabia, a move that would almost certainly scuttle the ongoing peace initiative."

But Iran and its proxies are likely to target American installations.

"Because the Iranians need to go after something American, they can find a way to do so without necessarily destroying their outreach to Saudi Arabia," said Ryan Bohl, of US geopolitical think-tank Stratfor.

"That could be a reward for Riyadh for its outreach."

Now you at Naharnet.com and AFP and all the rightist-thinking people of the world know that the US loves Mohammad bin Salman, who is the Saudi we always are hearing about, "Saudi Kills Khashoggi", "Saudi Dismembers Khashoggi", "Saudi Dissolves Khashoggi's Body in Acid". The US would never do anything to put its primary partner and ally, this Saudi, in peril or jeopardy. Why, if the US lost this Saudi, how could Israel survive as a racist state?