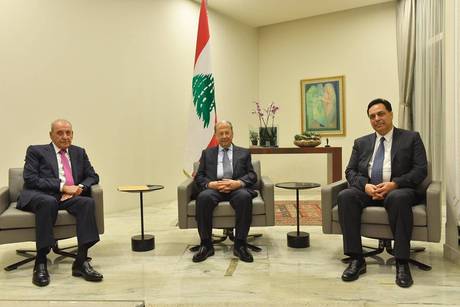 Lebanon got a 20-minister government led by former minister Hassan Diab on Tuesday, after 33 days of arduous negotiations.

The Cabinet’s line-up was announced following a meeting between Diab, President Michel Aoun and Speaker Nabih Berri at the Baabda Palace.

The Cabinet's secretary-general said the new government will hold its first session at 11:00 am Wednesday.

Earlier in the day, the Syrian Social Nationalist Party officially announced that it would not take part in the government.

Below is the government’s line-up as announced by the secretary-general of the Council of Ministers:

Minister of the Displaced: Ghada Shreim

What an insult to the people that were injured and died for a change of government. We have gone from bad to worse...

why doesn't naharnet write which party sponsors every "minister"? it is definately not an independent gvt ready to tackle corruption and indict all the corrupt politicians, they are paid by them!

What the hell is this????
I don't care how they pray! Could you please update with what degrees they hold? Thank you!

You mean secular state? Yes I support it and more, besides, why are you so sad about islamization instead of christianism? both are the same

Could you please state your sources?

I hope the LF now realize the depth of its mistake. As predicted, the dark age for Lebanon just started. No new election. No independent ministers, just cronies of the worst politicians with a useful idiot as a figure head. All selling Lebanon for 30 pieces of silver. The Thawra has been discredited (Assad tactic) due to its acts of violence thereby losing the support of the silent majority and making it responsible for economic woes. Now the Iranian tactic is to brutally suppress the Thawra in the name of restoring order and protecting economy. Hizbollah with its puppets managed to occupy the entire country and controls the army and institutions. No solution except Cedar Revolution II to liberate Lebanon from Hizb arms and bring to justice all traitors.

A government of independents whose every member is named by a political party, wow!!!