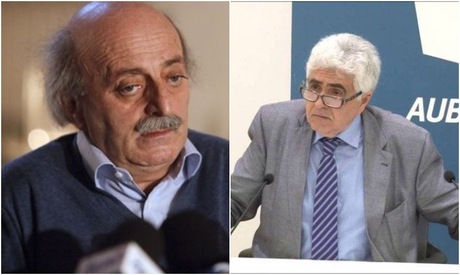 Progressive Socialist Party leader ex-MP Walid Jumblat lashed out Thursday at Foreign Minister Nassif Hitti over a tweet related to the economic cost of the presence of Syrian refugees in Lebanon.

“It seems that the new foreign minister, Mr. Nassif Hitti, likes to detonate large sound bombs in order to rise to the level of his predecessor in exaggeration, not to say well-known racism,” Jumblat tweeted.

“It is better to cross-check the numbers, Mr. Minister, or perhaps replace the foreign minister post with electricity,” the PSP leader added.

Hitti responded by tweeting a chart of a study prepared by the Finance Ministry and UNDP about the impact of the Syrian refugee crisis on Lebanon’s economy between the years 2011 and 2018.

He had earlier tweeted that “the Syrian refugee crisis has so far cost Lebanon more than 30 billion dollars,” adding that “the swift return of the refugees to safe areas in Syria is the solution.”

creating a scapegoat to deflect the real issue : their own corruption and their cowardice to take real action against corrupt politicians...

And here we were thinking that a government of technocrats not politicians would be allowed to tell the truth, and that the politicians would not interfere in the operations of the governemnt.
Wow, it took less than 2 weeks to show us how wrong these assumptions were.