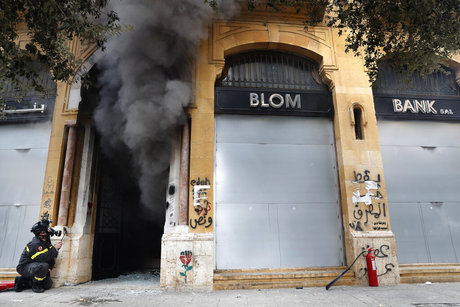 Lebanon, shaken by street protests and economic crisis and now set to default on its Eurobond debt, has pledged reforms that will serve as a litmus test for its new government.

"The real question is: will politicians do what's necessary to fix the problem?" asked Sami Nader, director of the Levant Institute for Strategic Affairs.

"If defaulting does not go along with a clear-cut commitment to reform, this will accelerate collapse."

Lebanon's debt burden, long among the largest in the world, is now equivalent to nearly 170 percent of its gross domestic product.

Prime Minister Hassan Diab said Saturday his government would suspend payment of a $1.2 billion Eurobond maturity due on Monday and seek debt restructuring because of dwindling foreign currency reserves.

His self-styled technocratic government, nominated in January to tackle a financial meltdown and unprecedented anti-government protests, must now prepare for talks with creditors and decide on whether to a seek the help of the International Monetary Fund.

With a long track record of chronic political gridlock, corruption and financial mismanagement, many expect Lebanese politicians to stumble.

The demonstrators who have rallied since October don't believe the government will carry through with the necessary changes.

"We want to remind the ruling class that the solutions have been available for years but, just like today, we lacked courageous political will," said activist group Taqaddom in a statement.

Another group, Shabab al-Masref, warned that the government pledges may just be "ink on paper".

Despite its turbulent history, the small Mediterranean country has never before defaulted, but in recent months it has grappled with its worst economic turmoil since the 1975-1990 civil war.

Foreign currency has become increasingly scarce, Lebanon's pound has plunged in value and banks have imposed tough restrictions on dollar withdrawals and transfers.

Diab met last month with an IMF delegation to discuss technical assistance to tackle the spiraling financial crisis, but he has yet to request funds amid internal divisions.

Banking experts have argued in favor of an IMF rescue, saying it would secure international assistance that the cash-strapped country desperately needs and provide the kind of assurances creditors are looking for.

"The IMF is the only option moving forward if politicians want an exit," Nader said.

But Hizbullah, which along with its allies holds a majority in parliament, has emerged as a vocal critic.

Last week it said it rejected conditions and "ready-made recipes" which global bodies could impose, warning against what it called "foreign guardianship" over the economy.

In some troubled economies, the IMF has in the past recommended subsidy cuts, tax hikes and a floating currency to address state insolvency, at times fueling the kind of street protests that have already shaken Lebanon for months.

An-Nahar newspaper, Lebanon's oldest daily, however warned the country could be exposed to more "danger" because the government has decided to embark on the default path without IMF assistance.

The IMF is a "necessary international mediator that could have helped Lebanon by providing it with cover" against creditors who may consider legal action, it said in an editorial Sunday.

As Lebanon braces to enter restructuring negotiations, a credible and feasible economic rescue plan is "the main prerequisite," said Mohamad Faour, a post-doctoral research fellow in banking and finance at University College Dublin.

Creditors usually prefer for such reform plans to be part of an IMF package, he said, warning that "kick-starting the negotiations with no concrete plan would be a non-starter."

Diab on Saturday reiterated Lebanon's commitment to reforms pledged at a Paris conference in April 2018, including spending cuts and electricity sector reform, as well as plans to downsize a bloated banking sector.

The economist Jad Chaaban, a prominent critic of Lebanon's political elite, blamed the crisis on decades of mismanagement by the state, including of commercial lenders, many of which are owned by politicians themselves.

He said in a Facebook post that the prime minister's latest announcement marked the "end of a system that saw banks covering up the corruption of the ruling elite."