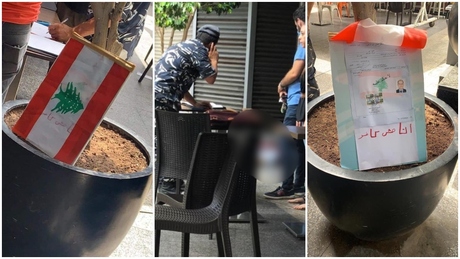 Two suicides in Lebanon on Friday, apparently linked to the country's deepening economic downturn, have sparked a new wave of criticism over the government's mishandling of the crisis.

A 61-year-old man committed suicide in the morning on Beirut's Hamra Street, reportedly leaving a death note denouncing "hunger" in condemnation of the dire economic and financial situations in the country.

The National News Agency said the man, identified as Ali Mohammed al-Hiq, was found dead after he shot himself in the head.

Nearby he left an official criminal record confirming that he had never committed an offence، a Lebanese flag and a banner quoting a famous Ziad Rahbani song that says "I'm not a blasphemer but hunger is blasphemy".

Protesters later gathered in the area, outside the Dunkin Donuts cafe, to deplore the country's dire situations.

Some of them later blocked the road and carried banners blaming officials for the man's death, as they rejected claims that he had been suffering from a mental illness.

"He killed himself because of hunger," the man's cousin screamed as the security forces carried away the body.

"He did not commit suicide, he was killed in cold blood," read one sign, blaming the government.

Saba Mroue, a protestor, said: "the political class is responsible."

The 37-year-old van driver hung himself in his home in the town of Jadra and his body was found on Friday morning, said municipality head Joseph al-Azzi.

The official said the suicide was linked to the economic crisis, saying the man was struggling financially.

A spokesperson for the Internal Security Forces confirmed the two suicides, saying that suicide rates are up this year, although he could not provide figures.

Jad Chaaban, an economist and anti-government activist, described the suicides as a "murder by a ruling class that is prepared to kill us, starve us and impoverish us so that they can guard their interests."

May you rest in peace. This Country is disgusting, when will the people go after the root cause of this crisis? Go to there houses and drag them into the streets before more people die of hunger