STL to Issue Verdict in Hariri Case on August 7 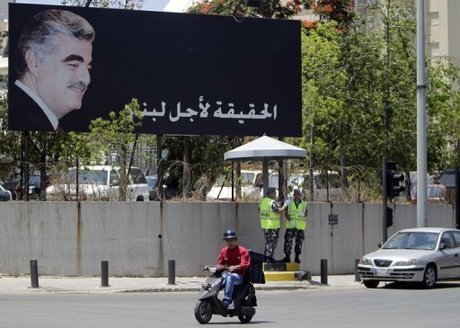 The U.N.-backed Special Tribunal for Lebanon on Friday announced that it will issue its long-awaited verdict in the case of ex-PM Rafik Hariri’s assassination on August 7.

“The Trial Chamber of the Special Tribunal for Lebanon (STL) issued a scheduling order today for the public pronouncement of the Judgment in the Ayyash et al. case (STL-11-01) in a public session on Friday 7 August 2020 at 11.00 AM (C.E.T),” the STL said in a statement.

In the filing issued Friday, the Judges stated that the Judgment will be delivered from the courtroom with partial virtual participation.

"Due to the COVID-19 and in line with the national guidelines in the Netherlands, a limited number of members of the media will be allowed into the public gallery and the STL’s media center,” the STL added.

The court had intended to issue the verdict in mid-May but it later postponed the pronouncement due to the COVID-19 pandemic.

Hariri, who was Lebanon's prime minister until his resignation in 2004, was killed on February 14, 2005, when a suicide bomber detonated a pickup truck next to his armored convoy on the Beirut seafront.

Another 21 people were killed and 226 injured in the assassination, with fingers initially pointing at Syria which had long been a power-broker in the country.

The tribunal was created by a 2007 U.N. Security Council resolution at Lebanon's request, and four Hizbullah suspects went on trial in 2014 accused of core roles in the attack.

Salim Ayyash, 50, is accused of leading the team that carried out the bombing, while Assad Sabra, 41, and Hussein Oneissi, 41, allegedly sent a fake video to the Al-Jazeera news channel claiming responsibility on behalf of a made-up group.

Hassan Habib Merhi, 52, is accused of general involvement in the plot.

The alleged mastermind, Hizbullah military commander Mustafa Badreddine, was indicted by the court but is now believed to have died while leading the group's forces fighting with the Syrian regime in May 2016.

Hizbullah chief Sayyed Hassan Nasrallah has refused to hand over the suspects and warned the tribunal "don't play with fire" while Syrian leader Bashar al-Assad says the court is a tool to "pressure Hizbullah."

The assassination of Hariri transformed the face of Lebanon, triggering a wave of mass demonstrations that ended with the departure of Syrian forces from Lebanon after a 30-year presence.

However the trial remains a sensitive subject in Lebanon, which is politically unstable and crippled with its worst economic crisis since the 1975-1990 civil war.

Prosecutors said during the trial that Hariri was assassinated because he was perceived as a "severe threat" to Syrian control of the country and as a "proxy of the West".

They said their case was "circumstantial" but "compelling", relying almost entirely on mobile phone records allegedly showing the suspects conducting intense surveillance of Hariri from just after his resignation until minutes before the blast.

But the absence of the defendants has raised questions about the trial's credibility, while the gap of 13 years since the attack has caused doubts about its relevance in a region transformed by the war in Syria.

Rafik Hariri's son Saad, who later went on to become prime minister like his father, called at the conclusion of the hearings in 2018 for "justice" but not revenge.

The court has heard evidence from more than 300 witnesses and amassed 144,000 pages of evidence -- at an estimated cost of at least $600 million since it opened its doors in 2009.

The tribunal opened a second case last year, charging prime suspect Ayyash with terrorism and murder over deadly attacks on politicians in 2004 and 2005.