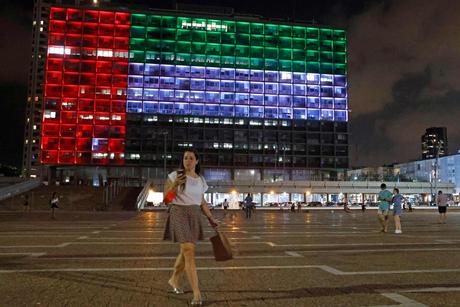 The United Arab Emirates and Israel are gearing up to open their doors for business after the surprise announcement they will normalize relations.

Here are five key areas expected to bring the economies of the two countries closer:

Even before the deal was announced last week, Israeli Prime Minister Benjamin Netanyahu said his country was collaborating with the UAE on ways to combat the coronavirus pandemic.

Research in various fields -- including medicine, disease and fertilizers -- is important for both countries.

Last month, before the agreement, two Israeli companies signed a deal with an Emirati firm to collaborate on the development of a non-invasive coronavirus screening test.

Another collaboration on coronavirus research between firms from the two countries was signed on Sunday, days after the deal was announced.

"It seems as if the immediate priority will be cooperation on research and development to combat COVID-19," said Kristian Ulrichsen, from Rice University's Baker Institute in the United States.

"This could be a popular way of normalizing people, both in Israel and the UAE, to the idea that coordination on such an urgent issue is in the greater good of both countries."

Israel's high-tech sector -- an industry that has earned it the nickname "start-up nation" -- makes up more than 40 percent of the country's exports, according to the economy ministry.

The UAE, especially the glitzy emirate of Dubai, attracts such companies because of its accommodating environment, with government support and investment.

More than a third of start-ups in the Middle East and North Africa are reported to be based in the UAE, which seeks to be a powerhouse in the technology sector.

In 2016, Israel exported $9.1 billion (7.6 billion euros) worth of agriculture technology products, according to the agriculture ministry.

The UAE, with a population of over nine million people from all over the world, has seen its food needs grow and diversify.

But with little arable land and extreme temperatures, it wants to overcome its dependence on food imports.

"There are opportunities in medical and agricultural technologies, and scope for coordination in startups and innovation policy," said Ulrichsen.

Collaboration in agriculture could "later make it easier to expand the scope of cooperation into more overtly political and diplomatic arenas", he added.

Israel has world-leading desalination firms, including IDE Technologies, which has 400 plants in 40 countries.

The arid UAE is dependent on desalinated water.

British watchdog Privacy International reports that, as of 2016, there were some 27 surveillance firms headquartered in Israel.

The UAE is also base for security, surveillance and data analysis companies.

It has set up a formidable network of cameras as part of its "Falcon Eye" security monitoring system.

They are both ardent fans of Kingdom of Saudi Arabia's Crown Prince Mohammad bin Salman. That's in addition to F-35s.

This fluff article belong in trash. Gone is (1) fight against any Democratic reforms in the Arab worls. For example libya Tunis Sudan and Morocco (2) collaboration to monitor dissent no matter how benign (3) a fight against any moderate islam ironically by supporting some of the least tolerant interpretations of islam (4) wreaking havoc in several Arab countries such as yemen and libya.