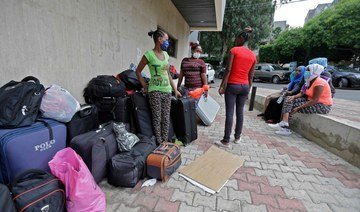 Two rights groups on Wednesday criticised a Lebanese judicial council decision to strike down a new work contract for foreign domestic workers, calling it a "sharp blow" to their rights.

The labour ministry in September approved the revised contract giving migrant helpers more rights, including being able to resign at will and keep their own passports -- to stop some employers confiscating them.

But recruitment agencies who bring in workers filed a complaint, and the State Council on October 14 issued a temporary decision to block it from coming into force.

"The State Council has delivered a sharp blow to migrant domestic workers rights by suspending the implementation of the new standard unified contract," said Diala Haidar of Amnesty International.

In its decision, "the council has failed to make any reference to the rights of migrant domestic workers in Lebanon... It only made reference to what the recruitment agencies consider to be severe damage to their interests," Haidar added.

The State Council said it had blocked the new contract's implementation because it could inflict "huge harm to the worker recruitment sector", according to the decision seen by AFP.

"There needs to be a cultural shift," Majzoub said.

"People are quite used to the idea that migrant domestic workers can't leave their employer without the consent of the employer, and they view that as normal."

Ali Al-Amine, head of the recruitment agencies' syndicate, claimed they did not want to cancel the new contract completely, but to make amendments.

"Our main objection was with the article on the recruitment mechanism and the termination of the contract, not to do with the rights of the workers," he said.

"There needs to be balance between the rights and duties of all parties in the contract."

Lebanon is home to around 250,000 migrants, mostly women from Africa and Asia, who work as housekeepers, carers or nannies.

They are not protected by the labour law, but instead work under a set of laws, policies and customs called 'kafala', repeatedly slammed by rights groups as allowing a wide range of abuse.

Activists had said the new contract was a step in the right direction until the labour law is amended to include all domestic workers.

Live-in domestic workers have been particularly hit by Lebanon's economic crisis, with many now receiving wages in the devalued local currency, and others not paid or even abandoned by their employers in the street.

There are decent Lebanese families who treat their housekeepers in civilised way, but unfortunately the majority are abusers...very shameful