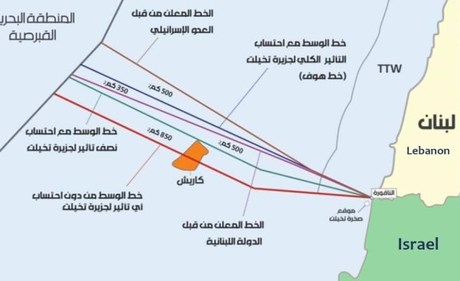 Israel has accused Lebanon of changing its position in talks on their disputed maritime border and warned it could lead to a "dead end" that would be damaging for the whole region.

The two countries, which remain technically at war, opened negotiations on the border dispute under US and UN auspices last month to clear the way for offshore oil and gas exploration.

"Its current position contradicts not only its previous one, but also Lebanon's stance on its maritime border with Syria, which takes into account Lebanese islands close to the border," Steinitz said.

Earlier on Thursday, Lebanese President Michel Aoun had set out his country's position on the maritime border, which he said should be "based on the line that departs on land from the point of Ras Naqoura".

Lebanon, the country of lost opportunities and hostage to Hezbollah. Step up, be courageous, and make a bet on your future by following the UAE, Bahrain and Saudi Arabia. Your peace benefits will greatly exceed a few obstinate oil field sq. km.

It is not an accusation. It is a fact. As soon as Ebola ordered them to do, they came up with a new mode of calculation and asked far more than what they were originally claiming. Disgusting!