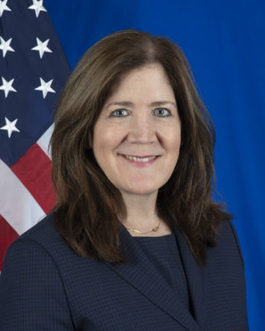 “By that I mean implementation of serious and far-reaching reforms to get the economy back on track,” Shea said in a virtual seminar organized by the Beirut Institute think tank.

“Lebanon needs to have an empowered government,” she urged, decrying that “the stalled government formation process prevents the undertaking of real reforms, some of which would generate much-needed revenues that are so desperately needed to meet the basic needs of Lebanon’s citizens.”

“I don’t detect a sense of urgency on the part of Lebanon’s political leaders,” Shea lamented.

As for the recent U.S. sanctions on Free Patriotic Movement chief Jebran Bassil, the ambassador said the move “represents just one example” of how Washington is “promoting accountability and more importantly standing with the Lebanese people.”

Asked whether more Lebanese politicians would be sanctioned in the near future, Shea declined to confirm or deny media reports in this regard but said that “there are a number of files that had been looked at in Washington, that continue to be looked at by those who are specialists in reviewing the applicability of our sanctions.”

God bless hezbollah aka the Lebanese government, army, and presidency for standing up to the Americans and their very talkative ambassador. Our Sayid and Marja' said it plain and clear: No sanctions, no acts of aggression, and no threats will diminish our will and the will of Gebran Bassil to confront the schemes of the Saudi-American-Israeli-Sudani-Bahraini-Emirati coalition.

ansarullah.
As you seem to be so pro-Iran why don't you go ahead and get President Aoun to declare that Lebanon is now the 6th Region or at least the 32nd Province of the Islamic Republic of Iran.