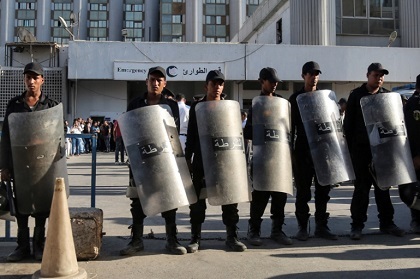 Human Rights Watch accused Egypt Thursday of imposing punitive conditions on hundreds of inmates at one of its most notorious prisons in collective punishment for a foiled September escape attempt.

The New York-based watchdog said evidence including a leaked video and a smuggled letter showed authorities had deliberately exacerbated already poor conditions at Cairo's Scorpion Prison, where many political prisoners are held.

The interior ministry has said that three policemen were killed in September's abortive jail break in which four death row inmates were shot dead.

"Because of the absence of sufficient natural light... the lack of humane sleeping and sanitation arrangements... as well as inadequate floor space, artificial lighting and proper ventilation, the Scorpion Prison inherently violates the basic rights of prisoners," it said.

The prison houses Islamist leaders and other high-profile dissidents. Since 2015, at least 14 inmates have died in its overcrowded cell blocks, human rights groups say.

Egypt holds some 60,000 detainees that human rights groups regard as political prisoners.

President Abdel Fattah al-Sisi, who as army chief led the 2013 overthrow of elected Islamist president Mohamed Morsi, has overseen a crackdown on political dissent that has put tens of thousands behind bars.

If any of this were true the UNHRC and UNGA would be condemning Egypt. Since this is not happening, it is highly likely that Egypt is respecting everyone's human rights.