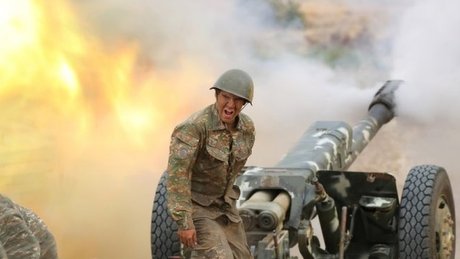 Armenian Prime Minister Nikol Pashinyan led Saturday a thousands-strong march in memory of those killed in clashes with Azerbaijan as the Caucasus country began three days of mourning amid persisting tensions.

Pashinyan has been under huge pressure from the opposition to step down after nearly 3,000 Armenians have been killed in six weeks of clashes with Azerbaijan over the breakaway region of Nagorno Karabakh.

As Armenia began three days of mourning for the victims of clashes on Saturday, the opposition kept up pressure on Pashinyan to resign over the handling of the conflict and what they say is a humiliating peace deal with Azerbaijan.

Accompanied by top officials, Pashinyan led a thousands-strong procession to a memorial complex in the capital Yerevan where victims of the conflict are buried.

"The entire nation has been through and is going through a nightmare," Pashinyan said in a video address ahead of the memorial march.

"Sometimes it seems that all of our dreams have been dashed and our optimism destroyed," he added.

The opposition has called the 45-year-old leader a "traitor" for agreeing to end the war on Azerbaijan's terms.

Pashinyan, whose wife and son were at the front during the conflict, has said he has no plans to quit and the peace deal was Armenia's only option, ensuring Karabakh's survival.

Many critics said on Saturday the leader should stay away from the memorial cemetery where the procession headed.

"He must not desecrate the graves of our children," Misak Avetisyan, who lost a son in the war, told reporters. The grief-stricken father said the prime minister should get down on his knees and "beg for forgiveness".

Many critics chanted "Nikol the traitor" as authorities dramatically beefed up security at the cemetery.

The war ended in November with a Moscow-brokered peace agreement that saw the Armenians cede swathes of territory to Azerbaijan which has been backed by close ally Turkey.

The opposition were to hold a separate march later in the day. Pashinyan's critics have called on supporters to stage a national strike from December 22.

A member of the Pashinyan-led procession said the prime minister should not be blamed for the mistakes of previous leaders.

"He is not guilty of anything," said Karo Sargsyan.

Pashinyan, a former newspaper editor, was propelled to power in 2018 after he channelled widespread desire for change into a broad protest movement against corrupt post-Soviet elites.

But after the war with Azerbaijan, many now say Pashinyan has betrayed Armenia's interests.

As part of the peace deal Russia deployed nearly 2,000 peacekeeping troops to Karabakh.

Moscow said on Friday that a Russian mine clearer was killed by a blast in Karabakh when an explosive went off earlier this week.

More than 5,000 people including civilians were killed during the fighting between the ex-Soviet rivals, who also fought a war in the 1990s over the mountainous region.