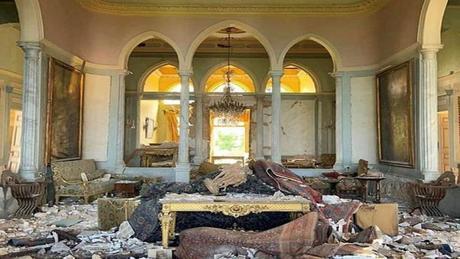 The RestART Beirut Fund, an ambitious international initiative launched by a group of young friends from five different countries under the aegis of the King Baudouin Foundation, is launching its first project – saving the badly damaged Sursock Palace in Beirut and helping open it to the public as a museum and cultural center.

The Fund is commencing its first fundraising campaign in time for Christmas in order to raise funds for the most urgent work – an emergency inventory and safeguard of the Palace’s heavily damaged artwork.

The Palace, home of the famous Sursock-Cochrane family since 1850, is a relic of Beirut’s Golden Age which mixes European and Eastern styles in a unique way and houses priceless paintings by Gentileschi, 17th century European tapestries, Oriental furniture and ceramics.

The Fund will help restore and open the Palace to the public while boosting the local economy by using local craftsmen, reviving traditional techniques where possible and involving Lebanese artists in the process.

“This place of beauty, refinement and rich history shall be shared with the art lovers around the world, Lebanese people and the rest of the world and allow them to learn about and take pride in the Golden Age, which they have the power to revive,” a press release said.

“A group of young friends and art passionates decided to act and help in the best way they could: by trying to save the often overlooked Beirut artistic heritage for future generations,” the press release added.

Following a visit to Beirut and discussions with the Sursock-Cochrane family, they decided to launch a charitable Fund in order to raise much-needed funds to save the Palace from further destruction and prevent its collections being lost or dispersed forever.

Dr. Marie Eve Didier, one of the six co-founding members explains: “We were all of course shocked by the terrible loss of lives and sufferings we witnessed after the explosion. But while the humanitarian emergency was naturally what everyone was focusing on, we realized there was another, less visible and overlooked emergency.”

The press release explains that Beirut’s artistic heritage was at risk of being lost forever: unique buildings were at risk of collapse and priceless art collections laid among piles of rubble.

“So we decided to help as best as we could – by trying to save at least one of these beautiful buildings and its artwork and open it as a museum. The Sursock Palace, with its amazing history and harmonious mix of European and Oriental artwork seemed the natural choice for this,” added Joseph El Hayek, cofounder based in Beirut.

“Today, RestART Beirut is introducing its first fundraising campaign -- help fund the most urgent work needed in this future museum: an emergency inventory and safeguarding the most fragile pieces. Once the Palace is restored and the art collections renovated, the Fund hopes to financially support resident artists, hold exhibitions and concerts at the Palace and eventually extend its work to other endangered buildings,” the press release added.

Further information on the RestART Beirut organization can be found on the Fund’s website: www.restartbeirut.art

Indeed good news.
I have visited many well known museums in the past years (to name a few in Sydney, Paris, Geneva, London, NY, Venice, Amsterdam, etc ..) I really think that Sursok museum has that level.