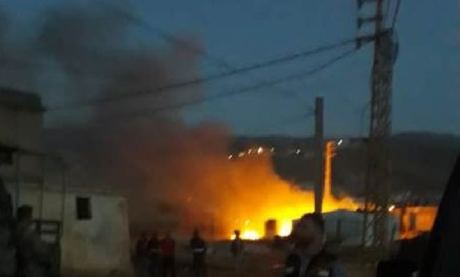 The Lebanese army said Sunday it had conducted raids and arrested two Lebanese men and six Syrians as part of an investigation into the torching of a Syrian refugee camp in the norther region of Minieh.

The statement said the Lebanese men had fired weapons into the air and torched the tents.

The army also confiscated weapons during the raids and said it expected to make further arrests.

More than 300 Syrian refugees were forced to flee the informal camp as the blaze raged through and burnt tents to the ground.

The fire ensued following a fight between a Lebanese family and Syrians living in the camp according to Lebanese media reports.

Four people were hospitalized with minor injuries from the fire.

Dozens of refugees returned to the remains of the camp on Sunday to try to salvage anything that might have survived the blaze.

"I came back to check on belongings inside our small tent only to discover that we no longer own anything," said Amira Issa, a 45-year-old mother of five who fled Syria eight years ago.

"We lost everything in one moment," she told AFP, sobbing.

The fire sparked an outpouring of sympathy on social media from Lebanese, who condemned what they called a racist attack.

"They have relocated to nearby informal settlements... or were taken in by area residents," said UNHCR spokesman Khaled Kabbara.

"We saw a remarkable level of solidarity from the Lebanese community offering vacant shelters, including hospitals and schools."

Lebanon says it hosts some 1.5 million Syrians, including around one million registered as refugees with the United Nations.

In November, around 270 Syrian refugee families fled the northern Lebanese town of Bsharri after a Syrian national was accused of shooting dead a Lebanese resident, sparking widespread tension and hostility.

lol the hypocrisy! The Syrian regime destroyed entire villages and cities and leveled them to the ground and it now expresses deep regret:)

People willing to make 300 people homeless and make them lose their every belonging just because they had a dispute with someone who lives there deserve a severe punishment. Take their belongings and give to the refugees. Make them pay severly. Its about common decency and anyone siding with the wrongdoers just because they have the same passport is garbage.

This is criminal and inhumane.

During the civil war of 75-90, thousands of Lebanese fled the country, I don't remember that they were ever been treated this way. The real norms and values of a person are visible In difficult time.