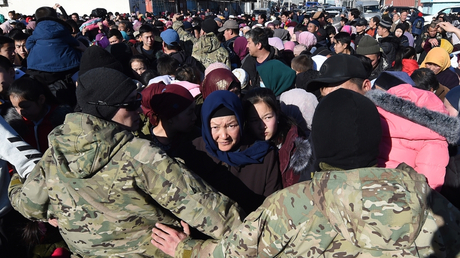 Two people who were granted asylum in Kazakhstan after fleeing alleged repression of minority groups in China were assaulted after their arrival in the Central Asian country, a rights group said Friday.

The two ethnic Kazakhs said they were victims of massive state repression in China's far western Xinjiang region, where rights groups say over a million Muslim and Turkic-speaking citizens have recently been incarcerated on arbitrary pretexts.

The group's report said that Alimuly is in a critical condition in hospital after a knife attack in the capital Nur-Sultan.

Akan, who the group said was attacked in the largest city Almaty, was shown with a large bruise on her face in a photograph posted on the group's website.

Bekzat Maksutkhanuli, an activist who helped Akan file a complaint with police on Friday told AFP that Akan was attacked on her way home from a grocery store.

"None of her personal things were taken by the attackers," Maksutkhanuli told AFP.

Akan and Alimuly were convicted by Kazakh courts for crossing into Kazakhstan illegally in 2019 and 2020 respectively.

The courts opted not to return them to China.

Both were granted temporary asylum by Kazakh authorities in October as activists raised their cases.

Akan has complained of tight surveillance by local security services.

Former US Secretary of State Mike Pompeo said on Tuesday, his last day in office, that Beijing's sweeping incarceration of mostly Muslim minorities in Xinjiang amounted to genocide and crimes against humanity.

Kazakhstan has pitched itself as the "buckle" in Beijing's trillion-dollar Belt and Road infrastructure and trade agenda and relies on China as a market for its natural resources.

Activists have criticised the authoritarian government for failing to condemn Chinese polices in Xinjiang, where thousands of Kazakh citizens have family members.

One campaigner who championed the causes of Xinjiang detainees and their families was arrested by Kazakh police on extremism charges in 2019 before being released from jail months later amid a public outcry.

Serikzhan Bilash, who said his arrest was the result of Chinese pressure, has since relocated to Turkey.