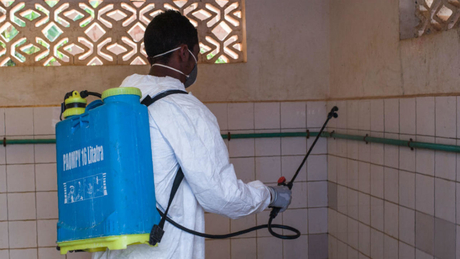 Thirty-one people have died in an outbreak of plague that erupted in northeastern DR Congo three months ago, health officials and experts said on Friday.

"We have more than 520 cases... of which more than 31 have been fatal," Patrick Karamura, health minister in Ituri province, where plague is endemic, told AFP.

The cases are the bubonic form of the disease, except for five cases of pneumonic plague and two of septicaemic plague, he said.

Anne Laudisoit, an epidemiologist with a New York-based NGO called Ecohealth Alliance, said the cases had surfaced between November 15 and December 13 in Biringi, in Ituri's Aru Territory.

The average age of patients was 13, but this varied between three months and 73 years, she said.

The World Health Organization (WHO) issued an alert in July of a plague outbreak in Rethy, also in Ituri.

Plague has persisted in the province since it was first confirmed there in 1926.

A long-feared disease with biblical connotations, but treatable today with antibiotics, the plague is caused by a bacterium called Yersinia pestis.

Laudisoit, who is in the area with a team of researchers, said an early sign of the latest outbreak came with the mass death of rats.

Germ-carrying fleas which live in the rats' fur then look for other hosts in proximity, which are humans. The bacterium is then transmitted through flea bites.

The east of the Democratic Republic of Congo also struggles with episodic outbreaks of Ebola.

Healthcare has been badly hit by militia groups that teem in the region.