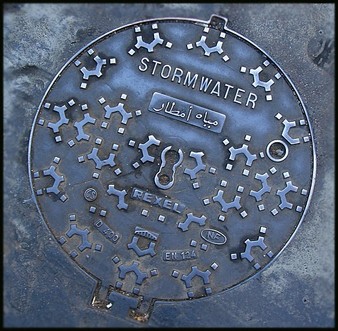 Governor Marwan Abboud told AFP Wednesday that soaring poverty had led to a spike in the theft of manhole covers, because "they are made out of cast iron which has become much more expensive."

Lebanon is in the grips of its worst economic crisis since the 1975-1990 civil war, and Abboud said the thefts started rising after the devastating August 4 port explosion sowed more misery.

The Lebanese pound has lost more than 80 percent of its value against the dollar on the black market, and a growing number of people in the once relatively prosperous nation are relying on food handouts and sinking into poverty.

The fast disappearing manhole covers, which the authorities say they cannot afford to replace, are making the streets increasingly perilous for vehicles and pedestrians, especially at night.

"We are deploying people to look for the thieves day and night," said one municipality official, who spoke on condition of anonymity.

Al-Akhbar newspaper said Wednesday that a cover weighing upwards of 70 kilograms (154 pounds) could fetch $100 for scrap, income that is attracting increasingly organized and professional gangs.

Disturbing and not new, one in front of my home got stolen years ago.
What a failed state.