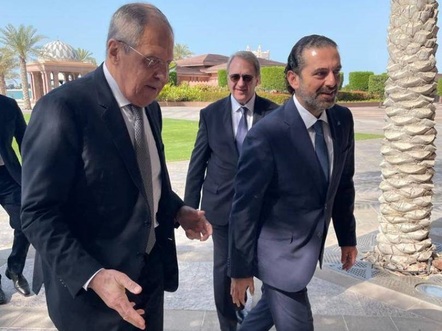 A terse statement issued by Hariri’s press office said discussions tackled “the various situations and developments in Lebanon and the region.”

The meeting was held in the presence of Mikhail Bogdanov, who is Russia’s Deputy FM and the Special Presidential envoy for the Middle East, and George Shaaban, who is Hariri’s envoy for Russian affairs.

Bickering between Lebanon's political rivals has left the country in a stalemate for months, only worsening the economic disaster sparked by a debt crisis and sovereign default last year.

Disagreements between Hariri and President Michel Aoun have delayed the formation of the government for more than four months.

Hariri had recently announced that his meetings abroad are aimed at rallying support for crisis-hit Lebanon.

“I’m visiting Arab states and countries in the region and the world to rally support for Lebanon and mend ties, especially Arab relations, so that the solution can begin quickly once the government is formed, and it will be formed,” he said at the time.

Is it possible that Saad Hariri statement willing to take the poison pill to save Lebanon is real. It may be. He understood that Lebanon only solution is to discredit entire political class, including his party, so Thawra has a chance for real transformation and reform. As duo Shia blocked parliament to prevent tribunal, and Aoun blocked presidency to get elected, Saad is blocking government giving Thawra a fighting chance to organize and unite. Any government today will float Hizb and Marionette Aoun and will be disaster to Lebanon. Saad may be willing to sacrifice his party so people understand the danger and consequences of Hizbollah and find no solution except Neutrality, No arms outside army and a new political class. Cedar Revolution II may be around the corner, with or without the Shia as in CR I.

Gebran Tueni, before he was assassinated by Hizbollah-Assad killing machine, talked about Lebanon's big tent that can accommodate all communities as our diversity is our most valuable resource. We are the Resala to the Arabs, Iranians and West. We could have been with our democracy, freedom and liberty the shining light to guide the Arab Spring and the Iranian Green Revolution. Sadly, the Shia duo suffocate our mission and killed our soul. My sincere hope is for the Shia community to break free of the criminal Hizb and corrupt Berri control and join the tent of free and independent Lebanon. Shia can be a main foundation of democratic and prosperous Lebanon and its Resala to the world.

You are dreaming.
1- Hariri is stalling because he was ordered to be tougher this time and not allow bassil to step on his toes
2- Thawra will get nowhere but destruct the economy further.

Note that
1 the Lebanese voted for these politician thugs, so We deserve them as leaders and
2, we were living way way way above our means. It was time to come crashing face down.

Thawra is wishful thinking and will get nowhere unfortunately. You will have to kill 1 miĺlion berri voters to reform the country. Impossible. So we r stuck.

At the right time, change happens fast as in CR I. Hizb support is based on illusions, brainwashing, child indoctrination, and subsidy welfare... just like in Iran. Iran killed its educated and intellectuals to squash the Green Revolution. Intellectual life has deserted the Shia community since Hizb overpowered reason by oppression and intimidation. Hizb support is a mile wide but an inch deep, not much different from Saddam and Kaddafi 99% support before their fall. Shia will quickly turn against Hizb and Berri once they realize their path is opposite to Imam Saddr’s constructive vision. Berri is a fraud and imposter with none of Saddr quality and vision. Imam Saddr had the same constructive and uplifting spirit as Rafiq Hariri in contrast to the destructive, corrupting and degrading spirit of Berri and Nasralah. Shia masses will be the first to hang its leader for taking them & Lebanon to the abyss to benefit Iranian criminal.