Schenker: France Speaks of Sanctions on Lebanese Leaders but Imposes None 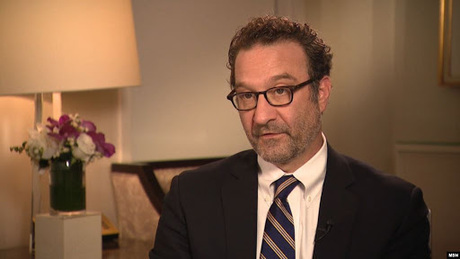 Former U.S. Assistant Secretary of State David Schenker urged Lebanese leaders to form a government, noting that France has only waived sanctions to pressure Lebanese officials into forming a cabinet but without imposing any.

In remarks to Lebanese news portal Asas Media on Wednesday, Schenker said: “The French have talked about sanctions since the port explosion, and President Emmanuel Macron mentioned earlier that France will punish those who obstruct the formation of the government within the French initiative, but all we see is obstruction and we haven't seen any sanctions.”

He added that “sanctions may push officials to work properly, mainly that the crisis is getting worse. I have talked to everyone about this issue since I was an assistant to the Minister of Foreign Affairs, but it seems that the largest segment of the Lebanese political class lacks a sense of responsibility.”

Schenker urged Lebanese leaders to form a government saying “your country is collapsing and your people are suffering,” he said “a government must be formed soon to impose the necessary reform to pull Lebanon out of collapse.”

Last year French President Emmanuel Macron proposed a road map to break the political stalemate in the former French protectorate. Macron has been pressing Lebanese politicians to form a Cabinet made up of non-partisan specialists that can work on urgent reforms to extract Lebanon from a financial crisis worsened by the Aug. 4 explosion that devastated Beirut.

Those efforts have led to nowhere as Lebanon’s politicians continue to bicker about the shape and size of a new Cabinet while the country is mired in the worst economic crisis in its modern history — a situation exacerbated by pandemic restrictions.

And with Joe Biden in the oval office we got ourselves another talker. Do not expect real pressure on Lebanese leaders anytime soon..

Only a second term from Trump could have saved Lebanon. Macron is powerless, Europe is with Iran. Basically we’re zucked.

That's not the point is it? Trump is an idiot, and a bigot, but his foreign Policy made the Iranians Bend over even lower. He almost snapped their backs! And he managed to make peace between Israel and 3 more Arab countries... so yes... I will miss him too!

The only way Lebanon can be safed is by the Lebanese. I will say it again all of this is noise, the people need to storm the Ministers homes and drag them out one by one and hang them. If they do this to one the rest will scater like rats. God bless and protect Lebanon!!!

You’re ridiculous Kazan, Trump did a lot of good for the Middle East. I’m not American, so I’m not concerned about his domestic policies. But one sure thing is, although he sometimes acted like a fool, he was a zillion times better than any of our crooked politicians.

I repeat you deserve your politicians

When I used to say screw the Europeans, I got a lot of thumbs down. No one is keeping the Mullahs alive in Tehran but the Europeans with their continuous trades and soft sanctions. The Mullas were on their knees, economy is collapsing, currency collapsing, unemployment sky rocketing (hmmm where is that happening also), they would've succummed to a people revolt and gotten rid of this cancer once and for all.