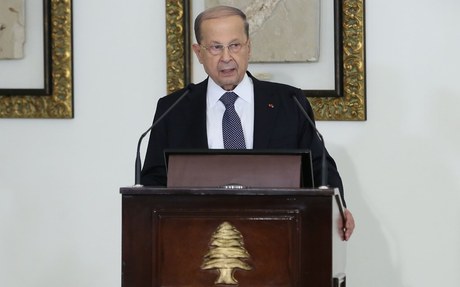 President Michel Aoun on Thursday demanded Israel halt all exploration in an offshore gas field on Lebanon's southern border, as part of an ongoing dispute over a shared sea frontier.

Lebanon and Israel, which are still technically at war, last year took part in indirect U.S.-brokered talks to discuss demarcation to clear the way for offshore oil and gas exploration.

But those talks stalled after Lebanon demanded a larger area, including part of the Karish gas field, where Israel has given a Greek firm rights for exploration.

"Lebanon is within its rights to evolve its position according to its interest and as suitable under international law," Aoun told visiting United States envoy David Hale.

He also called for a "commitment to not carrying out any oil or gas activities and not starting any exploration in the Karish field and its adjacent waters" until the matter was settled.

The talks last year were supposed to discuss a Lebanese demand for 860 square kilometers of territory in the disputed maritime area, according to a map sent to the United Nations in 2011.

But Lebanon then said the map was based on erroneous calculations and demanded 1,430 square kilometers more territory further south, including part of Karish.

Aoun still has to sign it before Lebanon sends it to the U.N. to make its new demand official.

For his part, Hale on Thursday said the U.S. was ready to continue brokering Israel-Lebanon talks "on the basis on which we initiated these discussions," appearing to reject the Lebanese move towards demanding a larger area.

What about asking your masters in Syria to halt gas exploration in the disputed area in the North?

Every day lost without negotiations means a day later when Lebanon will be able to start explorations in the area which will eventually be granted it.
However, President Aoun and his cronies couldn't care less about this. All they want is not to reach any form of agreement with Israel.
Excuse me for asking, but why is he not complaining about the Syrian explorations on the northern sea border?

1948 : looks like you think that you are living in that year instead of learning about the vitally important needs of Lebanon in 2021

"Unfortunately, this won't be the first time in the past 20 years that the Lebanese changed their naval maps for propaganda purposes," he continued. "Obviously, unilateral Lebanese steps will be met in kind by Israel."