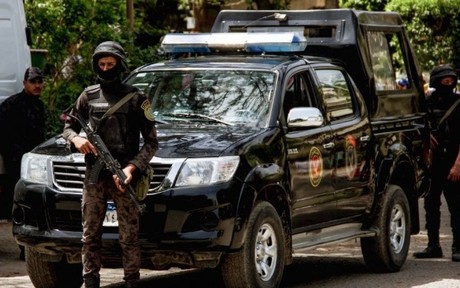 Egypt's interior ministry said Monday it killed three "terrorist elements" in the Sinai Peninsula suspected of involvement in the execution of a Coptic Christian claimed by an Islamic State-affiliated group.

"National security received intelligence about a group of terrorist elements involved in the killing of Nabil Habashi... in North Sinai... with the aim of carrying out hostile operations targeting the homes and houses of worship of Coptic citizens," the ministry said in a statement.

Three suspected militants were killed in an "intense firefight" with security forces, the ministry added.

The ministry said its troops found one suicide belt and a hand grenade in the militants' possession. It said a manhunt was continuing for other suspected members of the cell.

In a 13-minute video released by IS affiliate Sinai Province, the 62-year-old Copt from Bir al-Abd in North Sinai is shot dead at point blank range by a militant flanked by two others carrying rifles.

"As for you Christians of Egypt, this is the price you are paying for supporting the Egyptian army," the militant who executes the man says in the video shared widely on messaging app Telegram.

The Coptic Orthodox Church, which is followed by most members of Egypt's Christian minority, who make up between 10 and 15 percent of its 100-million population, paid tribute to Habashi.

"He kept the faith till the moment he was killed... The church affirms its steadfast support of the Egyptian state's efforts in quelling hateful terror acts," the church's spokesperson said.

Two young Sinai tribesmen were also seen being executed in the video, with the militants accusing them of fighting alongside the Egyptian military.

Most attacks have been carried out in the Sinai Peninsula but they have also used the territory as a launchpad to strike elsewhere in Egypt, such as the bombing of a chapel next to the Coptic cathedral in Cairo in 2016.

In February 2018, the government launched a nationwide operation against militants focused on North Sinai.

The army says some 975 suspected militants have been killed in the ongoing campaign.

But the region has remained largely cut off to journalists, making the compilation of independent casualty figures almost impossible.