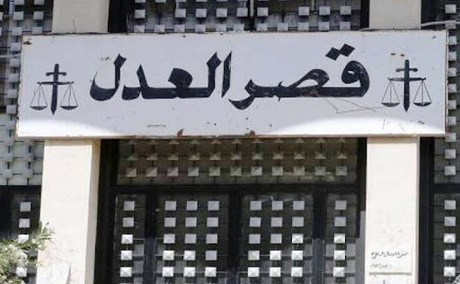 Mount Lebanon Public Prosecutor Judge Ghada Aoun appeared before head of the Judicial Inspection Authority Judge Borkan Saad on Friday over a number of complaints, the latest was raiding the offices of Mecattaf money exchange company.

There are 23 complaints filed against Aoun before the Judicial Inspection Authority.

Media reports said Aoun had arrived at the Justice Palace individually without any convoy or security presence.

The controversial judge carried out repeated raids recently on the Mecattaf company in Awkar, defying a judicial order dismissing her from investigation into financial crimes.

Aoun managed Wednesday to enter the offices of Mecattaf, after bringing workers to break open a metallic gate, as minor scuffles erupted outside between her supporters and the Internal Security Forces.

The Higher Judicial Council asked the Judicial Inspection Board to look into Aoun’s controversial actions while asking her to abide by the state prosecutor’s decisions.

The Council said the Inspection Board will question Aoun over “her breach of the obligation of reticence, her failure to honor her repeated pledges before the Council, her refrainment from appearing before the public prosecution, and her stances and behavior after the state prosecutor issued a decision redistributing tasks at the Mt. Lebanon prosecution.”

Order her to go on public TV and apologize for destroying public property.

The law says: bank is innocent until proven otherwise.

Will any judge other than one from the Aoun family dare defy decisions by the judicial council? Arrogance, Lunacy, and Destruction summarize what this creature is all about.

Lock her up. She's a deranged looney. I have never seen in my life, even in the most dysfunctional of lawless countries around the world, a judge goes out of their courtroom and ransack a private property. Absolute disgrace.

She should never practice law again and her license revoked. She's no lawyer, she's a, to put it in a nice way, a power crazed woman.

If we were in the 19th century or earlier, her parents would have locked up this monstrousness in a convent for life... I miss those days.