Hospitals Up in Arms amid Sharp Shortage in Medical Supplies 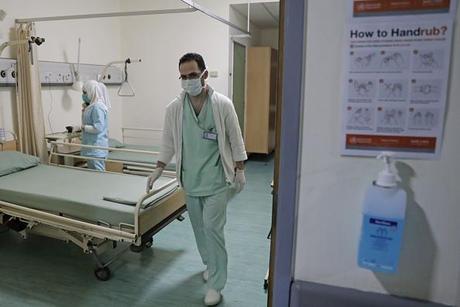 Doctors around Lebanon on Thursday staged sit-ins outside hospitals protesting the dire conditions and sharp shortages in medical supplies, and called on the World Health Organization to step in and help the crisis-stricken country.

A group of doctors known as the White Shirts called for the protest, MTV television station reported.

“Hospitals in general suffer from a severe shortage of supplies necessary for conducting laboratory tests and diagnosing diseases. That has compelled many hospitals to stop conducting tests for patients,” one of the doctors whose name was not mentioned told MTV in anger.

“We had to reduce the number of patients admitted to hospitals due to shortage. Hospitals also suffer from a severe shortage of dialysis supplies. Patients could die one after another. We call on international organizations to step in and help Lebanon because its own officials are busy with their political aspirations,” he added.

Lebanon is wranging with an unprecedented economic and financial crisis that largely impacted its healthcare system.

Hospitals have decided to cut down on elective surgeries to save what is left of medical supplies and anaesthetics for emergency procedures.

The state resources are stretched to their limit by the crisis and international aid dwindling due to a failure to deliver promised reforms.