Netanyahu Defeat Brings Relief, if No Policy Shift, for Biden 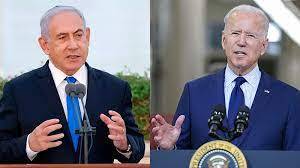 When Joe Biden entered the White House, he waited nearly a month to speak to Benjamin Netanyahu, fueling perceptions he was in no hurry to please the divisive Israeli leader.

After Netanyahu was unseated Sunday, the White House fired off a statement in minutes congratulating the new prime minister, Naftali Bennett, with Biden quickly calling and telling him that "Israel has no better friend than the United States."

The fall of Netanyahu, the longest-serving prime minister in Israeli history, is bringing a sigh of relief to many in the Biden administration, who will no longer have to deal with the pugnacious right-winger who had closely allied himself in US politics with the rival Republican Party.

But the shift could be more about tone than substance. The new Israeli government is unlikely to take a different view on Iran, a major source of disagreement between Biden's Democratic Party and Netanyahu, and the unwieldiness of the coalition -- which unites Bennett, a staunch supporter of Jewish settlement of the West Bank, with centrists and leftists -- makes prospects slim for any dramatic moves on the Palestinian issue.

"Netanyahu played a brazen game of partisan politics in the U.S., and I'm sure it is a relief for the Biden administration to be dealing with a different prime minister -- even if they don't really know what to expect from him yet," said Michele Dunne, director of the Middle East program at the Carnegie Endowment for International Peace.

"What the Biden administration will hope for is that the government headed by Bennett will manage the U.S.-Israel relationship more quietly and amicably than Netanyahu did, and will also be more careful about avoiding actions in Jerusalem and elsewhere that can inflame relations with Palestinians," she said.

Brian Katulis, a senior fellow at the left-leaning Center for American Progress, said Netanyahu's downfall could "stabilize the bilateral relationship in important ways in part because of the lack of trust and confidence that existed at a very personal level with Netanyahu."

"All of the breathless anxiety about Netanyahu and what he may or may not do looks like it's in the rearview mirror," Katulis said, while noting that Netanyahu -- and those who share his brand of politics -- are sure to remain on the Israeli political scene.

New Foreign Minister Yair Lapid, a centrist who tenaciously hammered together the new coalition, said Monday that Netanyahu's government had taken "a terrible gamble, reckless and dangerous, to focus exclusively on the Republican Party and abandon Israel's bipartisan standing."

In a scenario unthinkable a decade ago, Israel faced strong criticism in Washington over its deadly offensive last month in the Gaza Strip, with the left-wing calling for the $4 billion in annual US military aid to be on the table.

Biden, who has long ties to Israel, faced down the pressure and waited a week before nudging Israel for a ceasefire, calculating that public rebukes of Netanyahu could backfire.

In his final remarks as prime minister, Netanyahu said that the Biden administration had "asked me not to discuss our disagreement on Iran publicly" but said that he would refuse "on matters that endanger our existence."

Netanyahu -- who, like Bennett, has lived in and is deeply familiar with the United States -- famously circumvented Obama to address the Republican-led Congress in 2015 to denounce the president's diplomacy with Iran.

Biden's predecessor Donald Trump and his son-in-law Jared Kushner, a family friend of Netanyahu, rallied behind him and delivered a policy wishlist, including moving the U.S. embassy to Jerusalem, giving the green light if Israel sought to annex Palestinian land and trashing the Iran nuclear deal, to which Biden supports a return.

Natan Sachs, director of the Brooking Institution's Center for Middle East Policy, said the new Israeli government would still have "very strong reservations" about the nuclear accord but may not risk a rupture of relations with Washington.

"On substance there actually is not that much divergence, not only between Bennett and Netanyahu but between the whole spectrum of mainstream leaders," Sachs said.

"But there is a very big difference between whether they go to political combat with Biden over the return to compliance."

On the Palestinian issue, Katulis said that the Biden administration was aware that the ideologically diverse coalition "is not likely to be a formula for any great leaps forward."

But Katulis said Biden, ever a pragmatist, could seek practical progress including easing the movement of Palestinian people and products.

With the new government, Katulis said, the Biden administration knows "it is not gunning for the Nobel Prize."