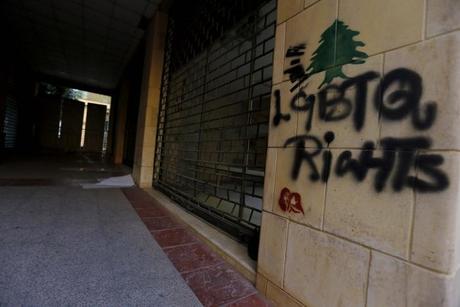 The blast at a port warehouse that devastated swathes of the city on August 4 last year had a disproportionate impact on the lesbian, gay, bisexual, transgender and queer community, the Oxfam charity said.

One of the world's largest ever non-nuclear explosions killed more than 200 people and left thousands homeless, including in the culturally diverse neighborhoods of Mar Mikhail and Gemmayzeh.

"Being home to many queer residents and queer-friendly restaurants, bars, clubs, community centers and public spaces, these neighborhoods offered a refuge for queer individuals," Oxfam said in its report.

The slow pace of reconstruction and the risk of gentrification if and when these areas are finally rehabilitated could result in the loss of LGBTQ hubs being more than temporary.

Oxfam said the LGBTQ community in Lebanon was now "facing a housing crisis" and that more than half of the individuals interviewed had their homes damaged in the blast.

The report said "39 percent do not have a safe living space, and a further 11 percent had been forced back with their families where many said they faced abusive, unsafe or unaccepting environments."

The blast has been "the final straw" for the community's people in Beirut, said Nizar Aouad, Oxfam's Lebanon gender advisor, adding that "it destroyed whatever safe spaces were left in the city."

Some of the bars, nightclubs and community spaces where the queer community used to gather safely have also been closed down by successive lockdowns caused by the Covid pandemic.

Chances they will reopen now that restrictions are being lifted have been curtailed by a devastating economic crisis, which the World Bank has described as one of the world's worst since the 1850s.

Religiously diverse Lebanon is one of the Middle East's more liberal countries, but the LGBTQ community continues to face systematic social, economic and legal discrimination.

lol @ the Shia christian of European parents from Nabatieh with a deep and wide luv tunnel that is open to the public 24/7.

Yes, I am concerned about blablablabla!

The LGBTQ++ need to be assisted because they’re extremely vulnerable and subjected to abuse especially for many unscrupulous coppers.

Since half the world have become sympathetic to these people's plight - two of Europe's countries have prime minister who belong to such group, they should seek their help to leave Lebanon and be safe where their actions are condoned by the public. These are people that we all should respect; but, with religious fanaticism one couldn't guarantee their safety, and hence, their relocation is highly recommended. I am not an advocate of this kind of group as a Christian, but I don't hate them or even condemn them, as Jesus is the one to judge them. I might even turn to be more sinful than them in Jesus's eyes, who knows. Just to make my stance clear on this issue.