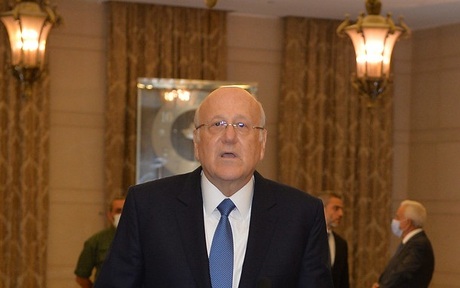 Prime Minister-designate Najib Miqati on Tuesday met with President Michel Aoun in Baabda to brief him on the outcome of his nonbinding consultations with the parliamentary blocs regarding the new government.

"The opinions were largely identical and, God willing, we will hold successive meetings in the next two days," Miqati said after meeting Aoun.

He had pledged earlier in the day to hold continuous meetings with Aoun in order to speed up the formation of the new government.

“There was full unanimity on demanding swiftness in the formation of the new government, and after today’s session I will brief President Aoun on the outcome and I’ll always visit the presidential palace in order to achieve the government’s formation as soon as possible,” Miqati announced, after holding protocol, nonbinding consultations with the parliamentary blocs.

“With the formation of the new government we hope to restore the state’s role and presence and this is a thing that reassures citizens,” he added.

He also voted to continuously “exchange viewpoints” with Aoun.

The billionaire politician, already twice a prime minister, was designated on Monday, days after Saad Hariri threw in the towel.

The institutional vacuum is holding up a potential financial rescue plan for Lebanon, which defaulted on its debt last year and has since sunk into what the World Bank has described as one of the world's worst crises since the mid-19th century.

Tuesday's meetings with the parliamentary blocs are the customary official step that follows a new prime minister's designation but the high-stakes horse-trading has yet to begin.

This is what Hariri said when he was appointed. They said in three days the government would be formed, and then, nine months passed, and Hariri resigned. All these predictions are false and I believe that Miqati will resign in a month's time.

My trust levels in Mikati are lower than zero!

Yes, they agreed they must steal and put us more in debt, the divergences is each camp’s percentage.