Berri on Port Case: Finger-Pointing Must Target Those Trying to Exploit the Blood 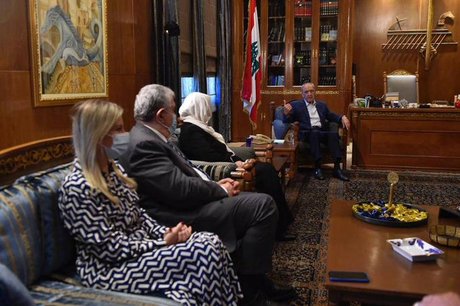 Parliament Speaker Nabih Berri on Thursday lashed out at parties he said are trying to “exploit the blood” in the port blast case.

“Finger-pointing must not target those who cooperated and will cooperate to the highest level with the judiciary, but rather those who are trying to exploit the blood for objectives that have become exposed,” Berri told a delegation from al-Mustaqbal bloc, which visited several parliamentary blocs on Thursday to discuss ex-PM Saad Hariri’s proposal regarding immunities.

“Parliament, including the Development and Liberation bloc, is fully ready to lift immunity off everyone without any exception, including off the judiciary which had put its hand on the case of the nitrates from the moment of the docking of the cursed ship to the moment of the blast,” the Speaker said.

“We support the suspension of all immunities as per the proposal submitted by al-Mustaqbal bloc,” Berri went on to say.

Hariri had on Wednesday said that the bloc would submit a proposal for “suspending all constitutional articles that grant immunity to all presidents, ministers, MPs, officials, judges and even lawyers.”

What he actually says is: "We must threat anyone who accuse us of anything!"

beri knows that Huzbullah is behind the blast and is unable to do anything by stifle the process without reaching any decision. I am sure this case will never reach any conclusions. Matter closed and those who died, died in vain. This is the way things happen in Lebanon.

Well kizb threw the shia under the bus, and amal are the ones that are going to get screwed the most (not that they don't deserve it).