Miqati Says Made 'Slow Progress' in Meeting with Aoun 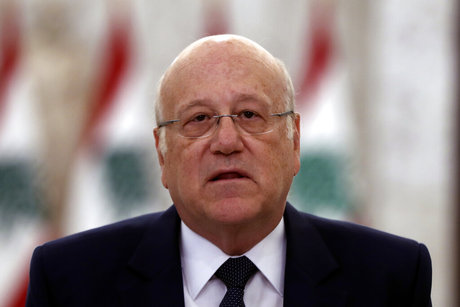 Prime Minister-designate Najib Miqati seemed to be upbeat Thursday after his fifth meeting with President Michel Aoun in Baabda.

“The meeting was important… and we made progress today in the consultations, albeit a slow progress, but we are determined and keen on forming the government,” Miqati told reporters.

Describing the meeting as a “positive step forward,” Miqati added that he has set a formation deadline for himself out of his “patriotic sense,” seeing as the constitution does not stipulate a deadline.

Asked about the reports that have suggested that he might resign soon, the PM-designate said: “I have accepted the designation in order to form (a government) and I have not mentioned anything about resignation.”

“But should I face a dead end as to finding a harmonious team to achieve revival, I will speak to the Lebanese, but so far I have not encountered any problem,” Miqati added.

Calling on the Lebanese to shun “despair,” the PM-designate said he will hold a sixth meeting with Aoun on Friday.

Miqati’s visit to Baabda on Thursday would likely be "the last."

Paris will then “exert pressures on Aoun and MP Jebran Bassil and European sanctions will be imposed prior to Miqati’s resignation before the end of August,” the source added.

“What’s more dangerous is that the club of ex-PMs will not offer Maronites any Sunni premier during Aoun’s tenure after Miqati’s resignation,” the source went on to say.

The government formation only depends on the outcome of what is accomplished during the "new" nuclear deal, till then (long time) there's no necessity in forming a government. In parallel the filthy iranians will advance their positions in every cardinal directions for some leverage on behalf of independent, patriotic Lebanese!

What will happen is that in 3 weeks when MIkati says is his deadline, he will quit and then Imbasil will publicly be placed on EU sanctions thus ending his presidential ambitions. The old man then gets a heart attack and is no longer able to assume the position and new elections are held and the aounists are thrown out of office.

At least I would hope it goes this way....

take it easy Mr Mikati, do not give up, keep on negotiating, your a business man, you know how to close a deal