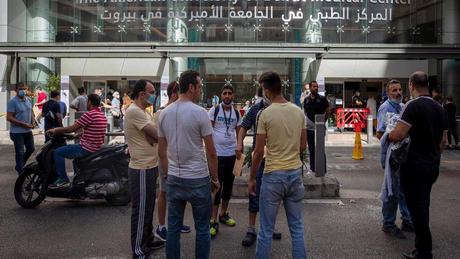 A top medical center and one of Lebanon's oldest and most prestigious university hospitals has warned it may be forced to shut down in less than 48 hours due to fuel shortages, which would threaten the lives of its critically ill patients.

In a stark warning, the American University of Beirut Medical Center, said 55 patients dependent on respirators, including 15 children, and more than 100 people with renal failure who are on dialysis would be immediately threatened.

The somber statement underscored the severity of Lebanon's economic crisis, which has paralyzed the country. Fuel shortages have prompted many owners of large private generators to turn off the machines.

Lebanon has for decades suffered electricity cuts, partly because of widespread corruption and mismanagement in the small Mediterranean nation of 6 million, including 1 million Syrian refugees.

The situation deteriorated dramatically this week after the central bank decided to end subsidies for fuel products -- a decision that will likely lead to price hikes of almost all commodities in Lebanon, already in the throes of an unprecedented crisis, soaring poverty and hyperinflation.

Over the past days, hundreds of businesses, including malls, restaurants and food deliveries, have shut down due to diesel and gasoline shortages. People wait for hours in long lines at petrol station to fill up their tanks.

Some gas station owners have been refusing to sell, waiting to make gains when prices increase with the end of subsidies. On Saturday, Lebanese troops deployed to petrol stations, forcing the owners to sell fuel to customers.

In its statement, the American University of Beirut Medical Center said it was "facing imminent disaster due to the threat of a forced shutdown" starting on Monday morning.

"Forty adult patients and fifteen children living on respirators will die immediately," it said, adding that the lives of hundreds of cancer patients, both adults and children, would be in grave danger in subsequent months. The hospital blamed the government and officials, saying they were "fully responsible for this crisis and unfolding humanitarian catastrophe."

The hospital appealed urgently to the Lebanese government, the United Nations and aid agencies to help supply the fuel before it is forced to shut down.

Lebanese hospitals are also facing severe shortages of medicines and medical products amid the country's unprecedented economic and financial crisis.

People currently get an average of two hours of electricity a day from the notoriously corrupt state company that has cost state coffers more than $40 billion over the past three decades. Many private generators that fill the gap have had to stop due to diesel shortages.

Several other private and public hospitals in Lebanon face similar shortages and have said they are running out of fuel and medical supplies.

Dr. Firas Abiad, director general of Rafik Hariri University Hospital, which leads the country's coronavirus fight, tweeted on Saturday that in order to preserve fuel, only two of the center's seven generators are currently running.

"The staff, working in most difficult conditions, continue to provide their services nonetheless," Abiad said.