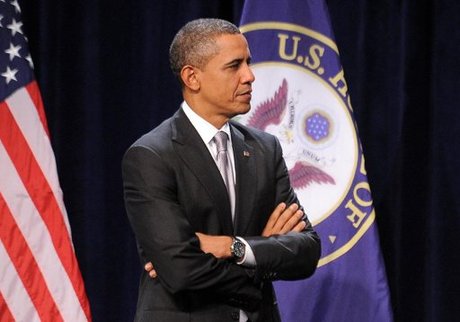 President Barack Obama downplayed a recent report about the use of U.S. drones in Iraq, indicating that the unmanned aircraft are mainly used for embassy surveillance.

Obama said during an online event on Monday that a New York Times story citing Iraqi officials as expressing outrage over the use of U.S. drones following last year's troop withdrawal was "a little overwritten."

"The truth of the matter is we're not engaging in a bunch of drone attacks inside of Iraq. There's some surveillance to make sure that our embassy compound is protected," he said during the event hosted by Google+ and YouTube.

In the same interview, Obama confirmed for the first time that U.S. drones had targeted Taliban and al-Qaida militants on Pakistani soil, a program that has escalated under his administration.

"For the most part, they've been very precise precision strikes against al-Qaida and their affiliates, and we're very careful in terms of how it's been applied," Obama said.

"This is a targeted, focused effort at people who are on a list of active terrorists, who are trying to go in and harm Americans, hit American facilities, American bases, and so on."

He said that many strikes were carried out "on al-Qaida operatives in places where the capacities of that military in that country may not be able to get them", such as Pakistan's lawless tribal zone.

"For us to be able to get them in another way would involve probably a lot more intrusive military action than the ones we're already engaging in."

The Times report said the State Department began operating some drones in Iraq last year on a trial basis and stepped up their use after the last U.S. troops left the country in December, ending the nine-year conflict.

The State Department drones carry no weapons and are meant to provide data and images of possible hazards, like public protests or roadblocks, to security forces on the ground, it said.